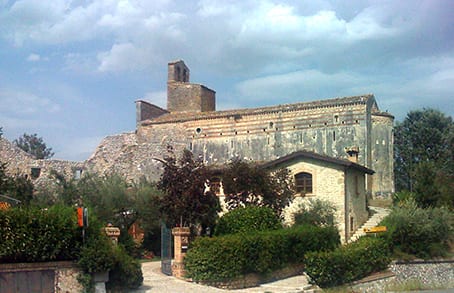 Picturesquely located on the outskirts of Isola del Gran Sasso, Ristorante San Giovanni di Fieni Luca sits next to the hill-top romanesque abbey San Giovanni ad Insulam, in part at least dating back to the 11th century, and to be featured in full in its own right in a subsequent feature on this website (unfortunately the abbey was closed for lunch!). However, we can at least report on this family-run restaurant. We are always on the lookout for good local agriturismi & restaurants so it was excellent to find another one so close.

Ristorante San Giovanni di Fieni Luca proved welcome shelter and relief from the hot midday sun when we visited it for lunch in early September. The restaurant was bustling with large family groups and other Abruzzese having lunch, so we were glad we had for once taken the unusual precaution of actually making a reservation. We were seated in a large wooden-framed glass-walled conservatory next to the bar area facing onto the road to Isola, which meant the temperature was not as cool as we would have liked, but was otherwise fine, the sound of jolly Italian children and their often equally animated parents providing a rather raucous but merry backdrop. The gardens and older parts of the abbey complex were just visible, and despite the proximity of the road it was a pleasant, colourful eating environment.