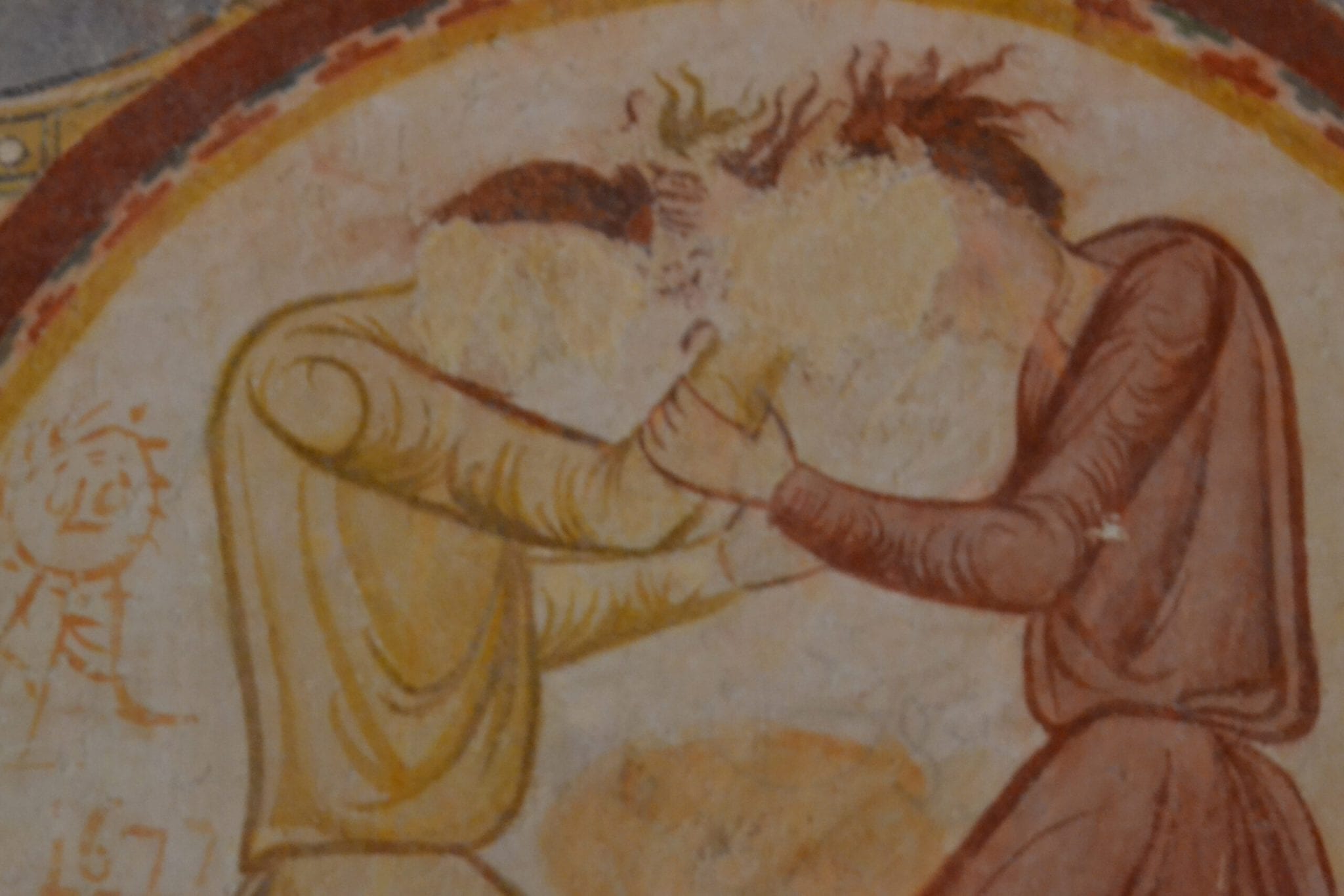 The Oratorio of San Pellegrino in Bominaco next to the hillside pine-clad Romanesque church of Santa Maria Assunta is quite simply a beautiful wonder.  So many times I’ve had friends, both Italian & international, taking pot-shots at Abruzzo for its lack of artistic treasures, but this small oratory more than rivals anything I have seen in Tuscany et al pre Giotto in the C13th for capturing expressions in what is largely Byzantine form in a Romanesque setting.

The original Abbey was founded by Charlemagne in the latter part of the C8th whilst he was in Abruzzo; he had an apparition in which a pilgrim begged him to honour the Syrian martyr, San Pellegrino, so he allotted lands on the site of a former pagan temple and charged local Benedictine monks to build what would become known as Bomenaco Monastery, supposedly the burial place for the Saint which is to the right of the altar. 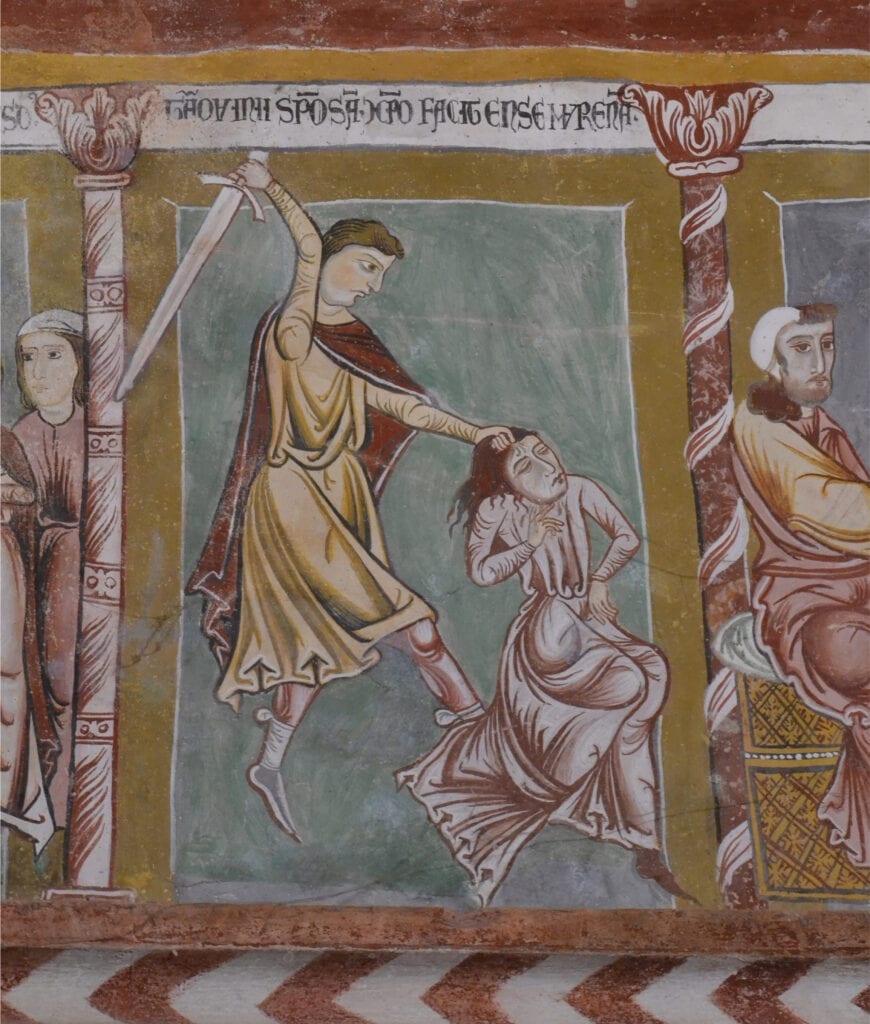 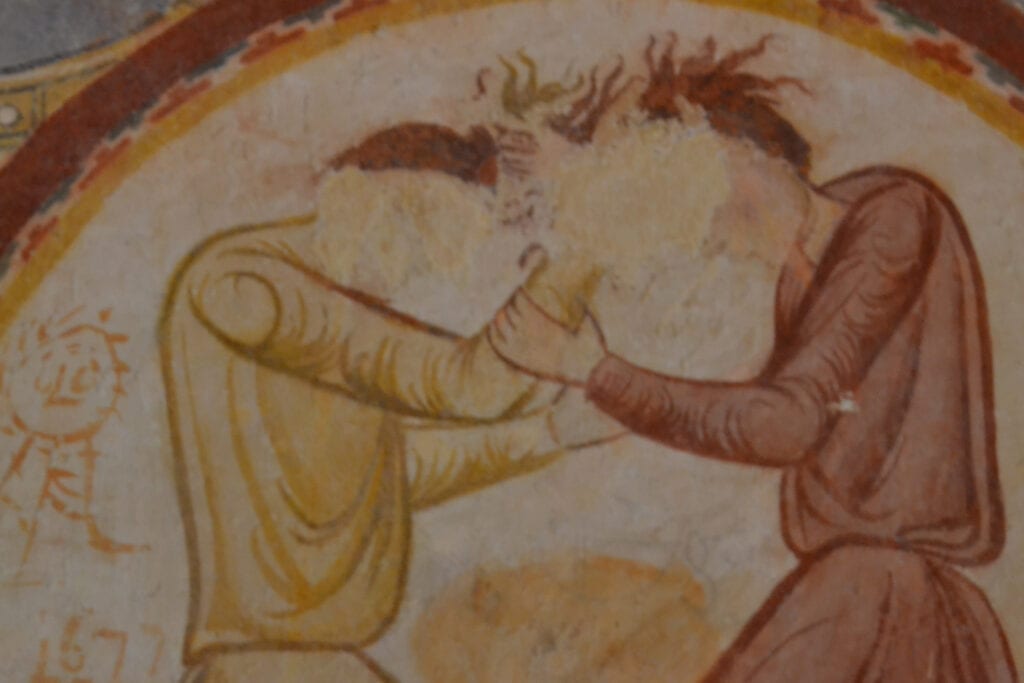 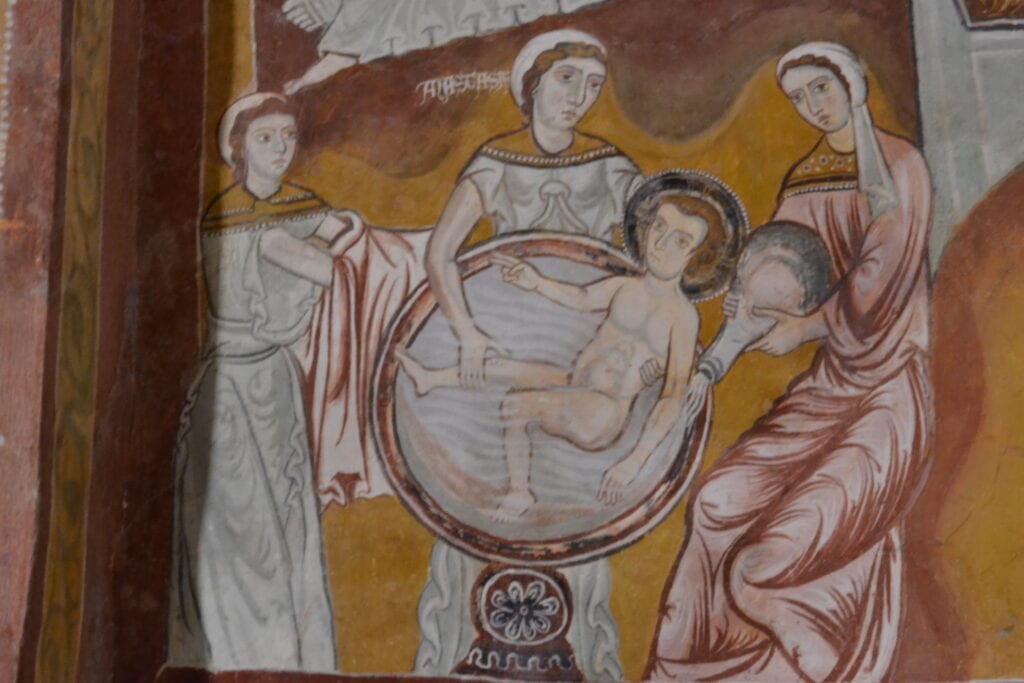 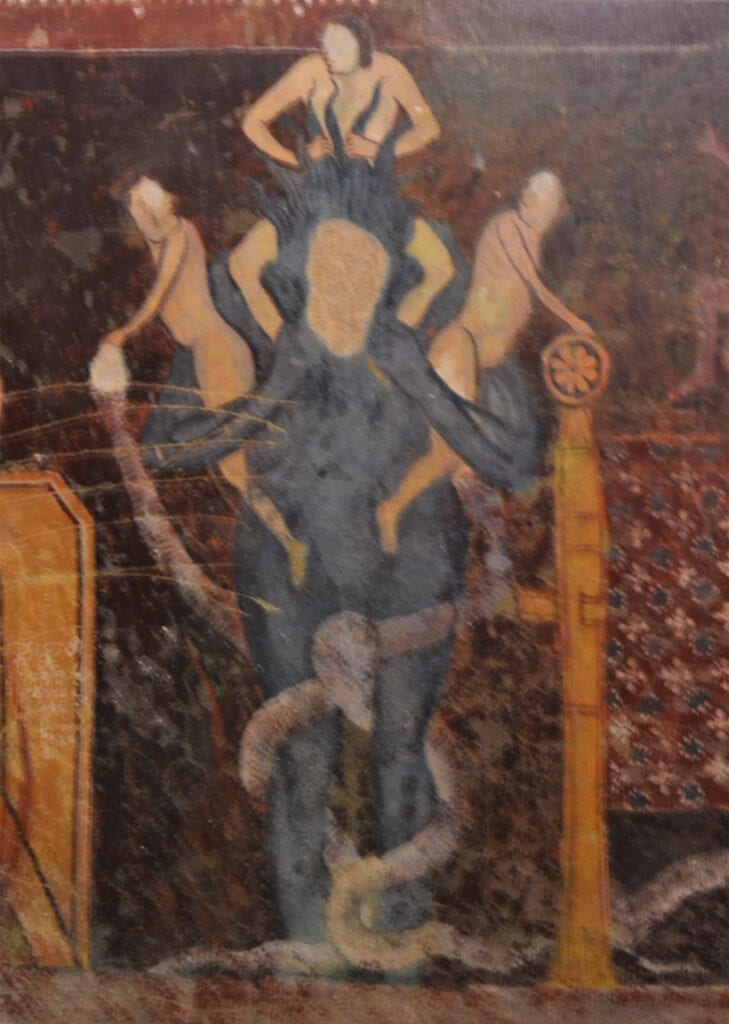 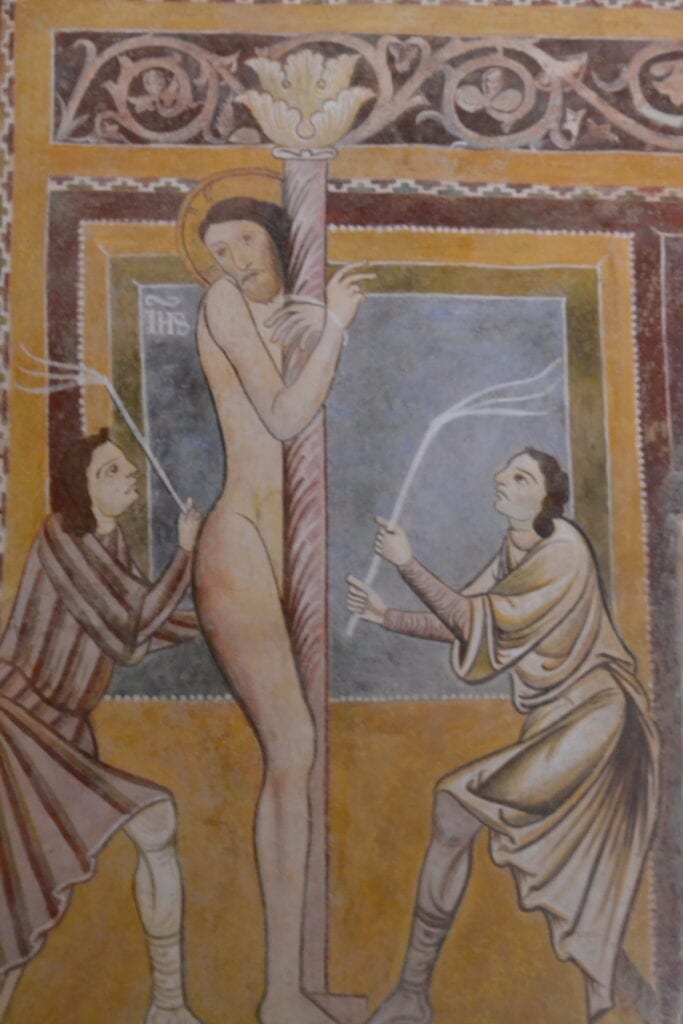 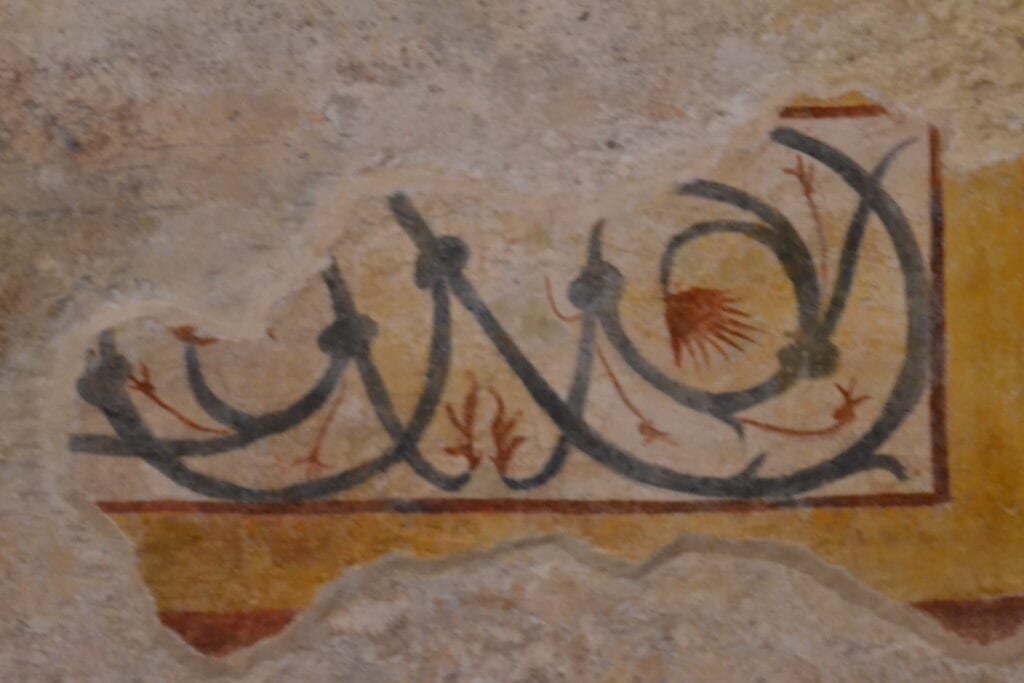 San Pellegrino’s interior is small, just 8m rectangular which is divided into 4 bays with pointed arches set on pillars.  The most important parts of the liturgy performed by the monks in prayer and choir are depicted representing episodes of the Old & New Testament that includes The Passion of Christ; with a brightness of colour and palate and overriding feeling of harmonious symmetry you do feel that you are in a house of celebration.  Perhaps this is due to conservation, and the subtle lighting created by 2 rose windows.  There is a giant St Christopher on the entrance wall that you come in through, his monumental form is amazing compared to its contemporaries.  One does have to wonder who was the model for him, as his hips are far more feminine than the traditional flat-hipped males elsewhere in the room.

I loved the bottom frescos depicting the inferno on the left near the entrance, although the demons actual faces have mostly been obliterated, the graphic depiction of naked women literally feeding them with their full voluptuous breasts fully on display is very unusual for the time.  My favourite too was the astrological calendar to the left & right bays next to the altar, each embellished with a human representative, and including the phases of the moon  to help the monks keep track of the right liturgy for a particular month & day; what a mash-up!

Next door, started in 1001, is the Church of Santa Maria Assunta.  Divided into 3 aisles by seven arches you can see why this is such a popular church still today to get married and have your first communion etc in – there is even details on how to hire it in English outside for anyone wanting to get back to their roots so to speak!  For those that like natural soft lighting this Church will definitely appeal; the light here is diffused, and it is no wonder that it’s loved by romantics.  When we visited the choir were practicing their motets which did make it more special to wander round in and take a look at its remaining frescos (different style & age than the oratorio), and the pulpit relief sculptures that were particularly good. 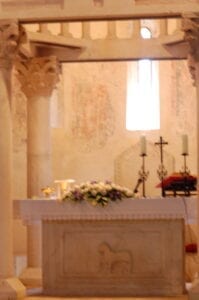 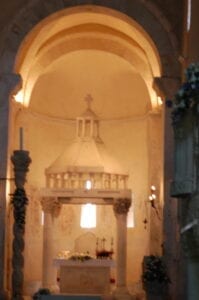 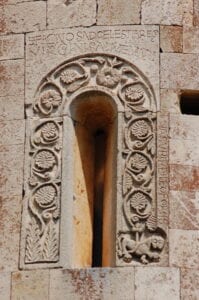 Also worthy taking a  few photographs is the tracery around the windows of the triple apse externally, wonderful.  If you aren’t into churches then go for the view, there is a great valley & hill landscape vista out towards Sulmona that is worth walking up the hill for.

You will need to get the key-holder to let you into these; again there is a printed information in English giving the contact number, if you don’t have a mobile phone with you there is a bar at the bottom of the hill that you can ask in.  You will be expected to pay the €2 for lighting the oratory and to give a small gratuity.

Public Transport – It’s possible to catch a bus from L’Aquila to this village, a 30 km ride.

Scenting the Truffle at Campovalano’s Sagra

The Red Cross ‐ A Historical Symbol From...

Romancing the Stone[work] – at Abbey San Giovanni in Venere