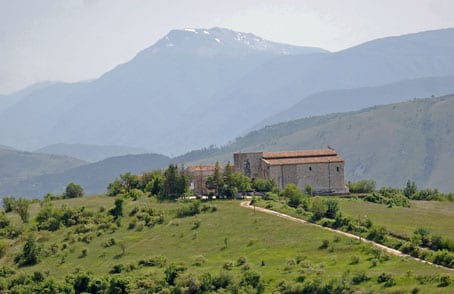 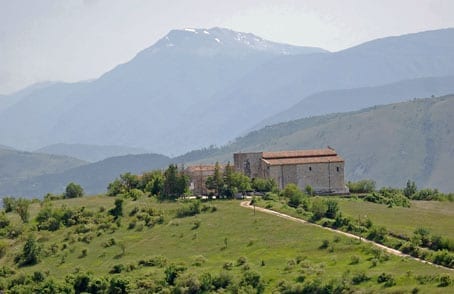 The church of S Pietro d’Albe off the ancient roman town and ruins of Alba Fucens is one of those Abruzzo churches that epitomises that blend of bewitching natural setting with antiquity which Italy, the living museum, is so famous for.

A giddy 360-degree panorama at 865 masl allows you to observe the town of Albe, the C14th incarnation of the Roman Alba Fucens, dwarfed by the beautiful Velino mountain peaks that overlook the town and ruins of the nearby medieval Orsini Borgo/Castle of Albe Vecchio. 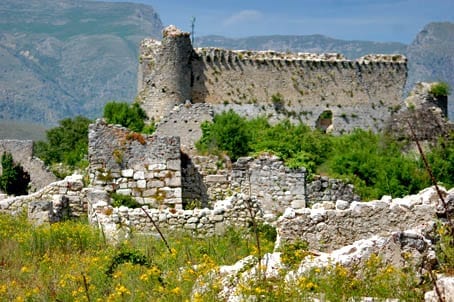 Swivel a little and there is the structured layout of the 303 BC once important & busy Roman outpost Alba Fucens; now clover clad in the spring & summer months, these streets were once pounded by the feet of up to 6,000 + local Roman residents.  In its previous incarnation it was a local Aequi & then the Marsi town named Fucentia. 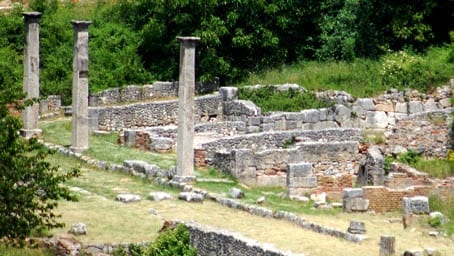 Look south and you will see the pancake flat fields that surround the modern city of Avezzano which was rebuilt in the 1920s following the 1915 earthquake.  If you think this area looks out of keeping with the rest of the landscape you’d be completely right, originally this was Lake Fucino, hence the Marsi name for the town, central Italy’s largest lake that was drained in 1878 by Prince Alessandro Torlonia.   Alba means dawn in Italian and you have to imagine looking out at this area as the sun hit the waters here as to why temples and churches were built on this promontory and why previous civilisations found the area so important for trade with the Adriatic Coast. 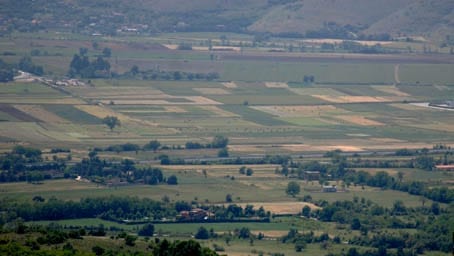 Like so many of Italy’s churches, S. Pietro was a former temple dedicated to a more pagan deity Apollo, and which Benedictine Monks built over to create a Romanesque church, in which they installed the choicest columns & capitals from the Roman town of Alba Fucens.  Interestingly it is the only church in Abruzzo whose nave, aisles & high altar are separated by columns.  The church was elaborately extended within the C18th, implementing popular Baroque elements of  the period…and then came the earthquake of 1915 that saw the virtual collapse of the church. 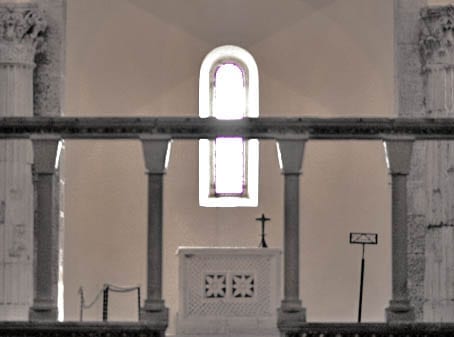 It was put back together again in 1957, with the decision made to take it back to its first, Romanesque incarnation under the direction of Florence’s Office of Holy Stonework.  The roof was reinforced with a cement cage & connected to the foundations ensuring it became earthquake proof, and many of the fresco treasures moved to Celano & Chieti Museums.  During this work they discovered the original altar to Apollo and afterwards along the lateral walls graffiti that dates from C2nd bc through to the C6th, which includes a depiction of a Roman boat.

Best time to visit? Sunday; the key-holder is available and sits outside the church, possibly and understandably more in his quest to seek funds for a doubly damned “sick wife & daughter” than to provide a pathway to ecclesiastical enlightenment?!  Reward expected for entrance need we say more…

Medieval Fragments & Lunch The Orsini Would Have...