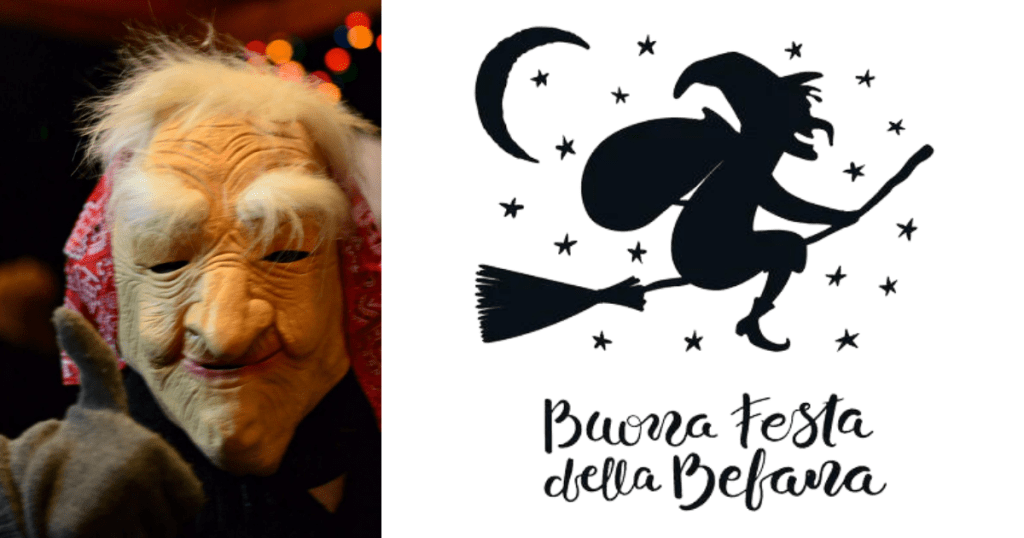 Outside of Italy, January 6th is held to be one of the most depressing days of the year, back to work with no official respite for grown-ups until Easter.  If only we all adopted Italy’s most famous witch La Befana and her sprinkle of magic. This feisty old witch beat Italian Catholicism into accepting her pagan broomstick ride over the country to drop off sweeties to children after she had procrastinated on her invite from 3 Wise Men to help them find Bethlehem and a new king… or so goes the modern interpretation of her visit.

For those who have never heard of La Befana before, she is a witch, sorceress, or think Macbethian old crone, whizzing across the Italian countryside on her broomstick.   Children hang up stockings next to the chimney, her entrance to their house, which she whooshes down and leaves gifts depending on their behaviour; she leaves lumps of coal, and onion and garlic for the naughty (still obviously a gift though, bringing warmth and the means to fight off winter colds) and for the virtuous sweeties & small gifts.

She’s one famous witch who has become a noted eco-warrior due to her green method of transport – no methane-producing reindeer, recycled rags for clothing and who only needs some bread soaked in wine to facilitate her passage through the night.  What a cool crone!

ItalyHeritage has the comprehensive summary of the history of Italy’s most generous witch, but it’s worth dipping into Shakespeare and his Twelfth Night for another insight into how magical the night preceding Epiphany previously was for families long ago as they looked into their log fires to seek out omens for their crops in the coming year. Punishment, expectations, and rewards were moulded into mythological and then Christian figures that softened the worries of famine. La Befana brought rewards to both the good and bad, the benevolent coal or onion she left for naughty children meant a warm fire for them to sit beside or a health-boosting dinner ingredient.

In our small village in northern Abruzzo,  the eve of La Befana’s visit is a time of fun, the village joins together, scrabbling about for sweets that are thrown by 3 masked and silent interpretations of Le Befana start the celebrations.  The children of the village are gifted stockings, brimming full of gelatine sucky sweeties handed out from an enormous hessian sack by the 3 witches.  All the villager’s march around our hamlet behind a big bass drum and a solo accordion player down to the village bocce/social club where everyone can gobble down the very best home-made sausage pizza and of course pizza with French fries for the kids – (whoever said that Italians were snobby about pizza toppings hasn’t yet experienced their own version of this wicked favourite). Parents and grandparents get to drink the very best soft honey & fruity homemade wines from grandfathers’ cantine, and dance polka and other folk tunes played by 3 accordion players and an acoustic guitar. 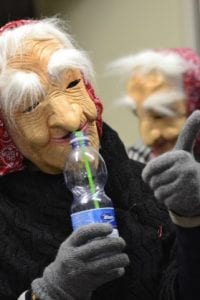 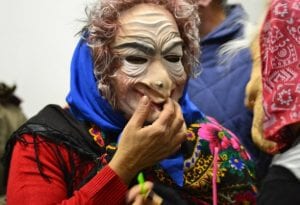 As a woman in an overt image and age conscious world, I love that La Befana remains untouched, simply an ugly wrinkled old lady who wear rags and patched clothes.  Her celebration in our village makes the usual routine of taking down a Christmas tree and lights to close Christmas that seem so glum, lonesome and finite become instead a continued celebration of children warming food and dance. There are 2 ends to Christmas and there is one way to make it end on a high!

Great idea, wish l could join in the party!

Merry Christmas Mikhail, are you going to be celebrating in Italy or are you back home in Russia?

We are celebrating in Loreto Aprutino but it looks like in Russia with so much snow.

Have a great time!

But also the snow !!

This is the one I always miss the most

This is one of my other hats @englishinthewoods, c

Last call to join us this Saturday, 28th May for a

Where has the best poppy display in Abruzzo, we th

My Big Fat Ferragosto – Consus and a Story of...