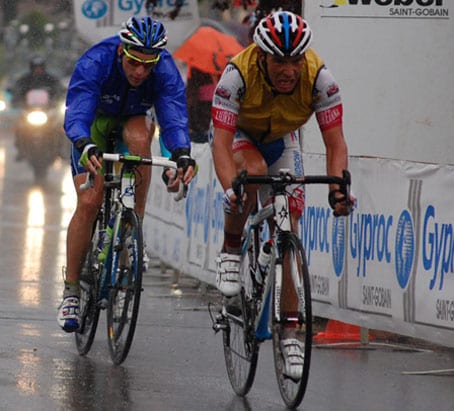 Abruzzesi bicyclists, Giro lovers and admirers of spandex-clad men were out in force to cheer the competitors of Il Giro 2010 today in Abruzzo’s small town and villages. Cries of support & encouragement embraced these magnificent men on their cycling machines, as they pedalled the  262km/165 mile route from Lucera in the Molise region cross border up to L’Aquila in Abruzzo, with three 6% gradient climbs, in less than 7 hours in chilled driving rain.

The glimpse you get as a bystander to Italy’s equivalent of the Tour de France is all but brief, but so worth making the effort to be there in the flesh for, an experience that should be part of an Abruzzo holiday in May.

The speed with which the cyclists whizz by stays with you the rest of the day and beyond, as do the pained expressions, the furrowed brows, the clenched lips and straining calves!  A feeling of complete wonderment, nay bafflement, as to why anyone would feel pleasure competing! Particularly when the rain at those speeds most have been as sharp & piercing on the day as flying needles; but mostly the feeling of insane jealousy of how far it is possible to push the human limits hits you as does the spray from the bicycles (on such rainy days anyway).

Anyone who thought cycling was dull should visit the race; a veritable vibrancy of colour, from the combination of pink Il Giro branding, to the shiny polychromatic hues of tight spandex suits set against ultra lean, weather-tanned long legs, followed by the multi-coloured support cars coming up the rear.  It’s brief, rather like looking at a high-speed rainbow for 30 seconds but it will blow you away.

In1914 Giro, the race leader Giuseppe Azzini never made it to the finish line in L’Aquila. He was discovered 24 hours later suffering from fever in a house near Popoli around 50km away… why perhaps weather combined with the climbs!   Rionnaro Sannitico is a 10km climb with an average gradient 6.3%. This is followed almost immediately by Roccaraso, which again is a 10 km climb in length, but less steep.  The last climb is at Capo de Valle 208 km into the race that is a climb length of 8.6 km at a steep 6% average gradient.
The winner of the 11th tappa (stage) was Russian Evgeni Petrov in an incredible 6 hours, 23 minutes and 29 seconds, and just 5 seconds behind local Abruzzesi  Dario Cataldo.

View the photo-gallery of the 11th Tappa

Halloween, All Saints & Remembering the Dead in Abruzzo