Winter is Coming: The Strategies of the Animals of the Gran Sasso Park 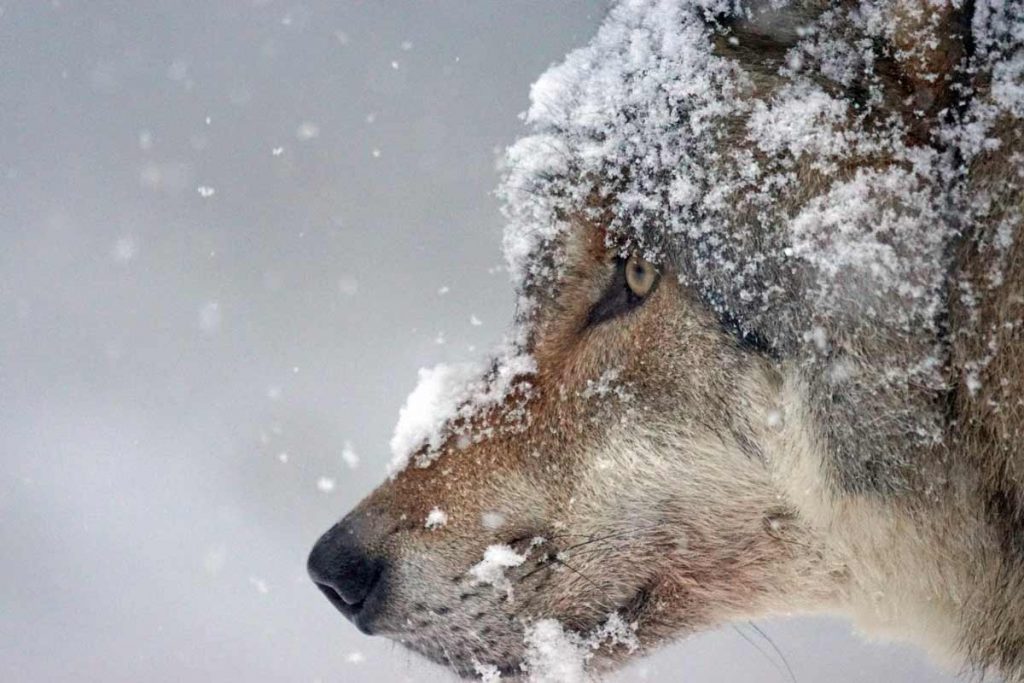 Have you ever wondered which of Abruzzo’s rich and diverse wildlife stays in Abruzzo over the winter?  What techniques are used by the animals to counter the cold and ensure they have enough to eat?   Journalist Alessio Ludovici  asked Federico Striglioni the zoologist of the Gran Sasso Monti della Laga National Park to explain what happens in this important time of the year.

Our friend the eagle remains nested in the park, but it becomes largely necrophagous, meaning it feeds heavily on carrion and carcasses.  However, if it spots an animal in difficulty like a chamois it will hunt.  In February breeding pairs begin their festoon flights, these garland-like cooperative flights where the male and female stimulate a chase with rapid swoops and ascents ready for the spring.

Once, Federico tells us, there was an out-of-season avalanche at Fontari on Campo Imperatore in which over fifty cows died. We went to check who took advantage of this unexpected feast and found everyone, wolves, foxes and eagles!

For the fox, winter is less of a problem. The cute canid knows his stuff. “The fox is generalist, they can be vegan or hyper carnivorous when needed,  they have a burrow and a nice protective fur, so they encounter no problems. In addition, it is able to move about like the wolf contrary to the many ungulates (hooved animals) of the Gran Sasso National Park.

Those most affected, even as far as saying distressed by the winter are the wild boars. It is the winter, together with the wolf that makes the decisive contribution in keeping populations under control more than the park’s management. Low and stocky, snow is really what causes the boars the most trouble and in turn, provides an easy almost like wedding feast for the wolves.  The more days of snow on the ground there are, the fewer wild boars there will be the following spring and summer.  However, for dispersed wolves that live alone outside the pack and the park, winter can be a challenge.

Boars are not the only ungulate to go into trouble. For the chamois, winter is worrisome.  Unlike other mammals, the chamois do not make the drop in altitude for fear of the wolves.  Over the winter they remain stationary in sheltered areas within the snow line.  They can remain entirely still for days, without eating if need be, however, their favoured sheltered points can also be the most dangerous as they are most subject to avalanches for example.

Bears will also feast on carrion if they have not hibernated.  A common misconception is that bears always hibernate. It depends on several factors and situations. The pregnant females hibernate, and females with their cubs, who will stay with their mother for at least 2 years remain in their den. The male bears will not hibernate if the winter is not harsh and the availability of food.

Autumn is a crucial time for the bear, in this period they only think about eating. In the years in which there is a lot of beechnuts, known as the ‘pascióna’, and of which there is now one year in every 4 on average this task is very simple. In the other years, they change their diet. For example, our bear has gorged himself on wild apples and rosehips, carrots, and bulbs. It is best not to disturb them at this time. Autumn is also a crucial time for pregnant bears. They will give birth in February and breastfeed their young with the reserves they have built up from this period.

We have done some genetic analysis on the several sightings of the Marsican Bear within the Gran Sasso park over the last few months and it is always the same specimen.  Our Gran Sasso bear moves a lot, its last sighting in the Simbruni territory showing just how important the ecological corridors are for them to move safely.

Winter proves no problem for the weasel which adopts a strategy similar to the as the chamois, it minimises its activity.

The cold signals topical and beautiful moments in the air and on the water.   During this period, thousands of pochards spend the winter on Lake Campotosto , which becomes the most important wetland wintering area in central Italy.  They are followed by the Cranes. They arrive from Siberia, in flocks, which contain hundreds of these long-legged fishing birds. They spend a period here with us and then leave for the Sahara. ” The route south is followed by the Short-Toed Snake Eagle.  This is one of the few birds of prey favoured by the climate emergency because it feeds on reptiles. With the cold it leaves the region and then comes back at the end of April.   Even the Honey Buzzard is forced to migrate, as it feeds on hymenoptera which includes bees and wasps.

There are other species that have interesting methods to contend with the Apennine winter, some really curious, such as the newt, an amphibian that lives in the lakes of the park. In winter they simply slip into the mud, under the stones, in the first 100 meters around the lakes.

Others have a simpler strategy. They drop a little in altitude. “This is the case of the Alpine Finch, which is a mountain sparrow. In winter, it drops in altitude, as it needs to eat. The crows lower their altitude too and become frequent visitors to the areas around L’Aquila’s Preturo Airport. ”

The Griffon Vulture, this necrophagous animal par excellence which is so important in cleaning the park from carcasses of all kinds struggles in the winter as it no longer has the carcasses of farmed animals.   In winter, if the ecological conditions are good, it can find the carcasses of the ungulates at lower altitudes, but it is a difficult task. When the griffin was re-introduced, 30 years ago, ‘du carnai’ were created for the winter on the Sirente Velino.  These are feeding stations for necrophagous animals of which there are now more than 150 griffons.  The Griffons do not migrate but simply change their flights away from the Gran Sasso towards the Simbruini where the temperatures are less hard.

Even among the flora, there are curious adaptation strategies. The Apennine edelweiss is a so-called glacial relic, a species that need cold climates. It lives at very high altitudes and in winter simply puts on a coat.   Life in the park is always bustling, in the Autumn and Winter it simply slows down the breath of our mountains a little, but life never stops.

Alessio Ludovici is a journalist from L’Aquila who works as an employee and a freelance. He loves his place but is open-minded to the world and likes to understand links between things and to linger on them.  Read this post in Italian.

Read Alessio’s other posts on Life In Abruzzo

The Story of Return, A Bear Without a...