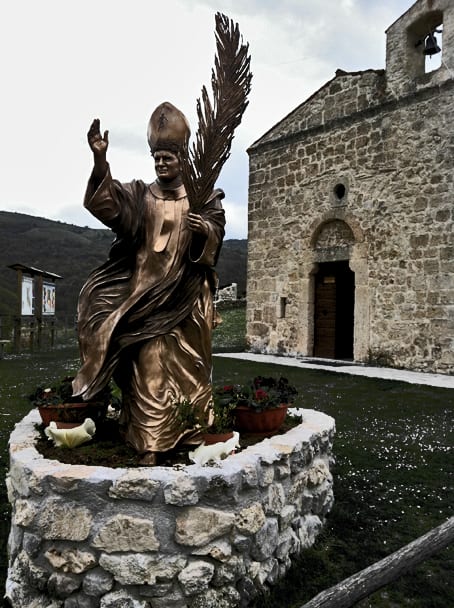 With Pope John Paul II set to become officially “blessed” on the 1st of May it seemed an appropriate time to visit one of his most beloved Italian retreats, San Pietro della Ienca, to try and gain an insight into one of the 20th century’s main spiritual leaders.

Set in the Campo Imperatore c.1170masl, near the town of Assergi in L’Aquila province, the medieval village San Pietro della Ienca, so named after one of the nearby mountain peaks, was eerily quiet when we visited. Nearly all the houses in the village had their shutters closed and we only saw one other person the whole time we were there. A small church, with an epic bronze statue of the popular ‘Papa’ in strident pose, holds a commanding position in San Pietro, from where one can look down into the valley back toward the feat of engineering that is the Gran Sasso tunnel in one direction, and toward L’Aquila in the other. 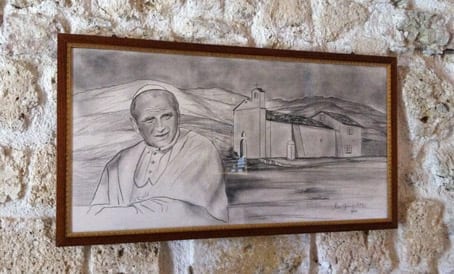 The village sits half-way down the mountain side, and feels simultaneously closed in by the mountains on all sides and yet exposed; when we visited there was a sort of misty drizzle lingering, and the greys and muted browns combined with the ghostly silence invoked a slightly melancholy mood indubitably conducive to spiritual reflection! The modest & serene chapel itself contains the remains of a venerable fresco, juxtaposed with a few items relating to Pope John Paul II.

John Paul II loved walking, earning himself the appellation “the theologian of the mountain”, and like many before him found the mountains particularly stimulating, spiritually and physically. It is easy when surrounded by such rocky splendour as San Pietro della Ienca to see why mountains have featured so significantly in the major religions, a place for communing with the Divine or spreading the Divine Word, whether for Moses (Sinai and/or Horeb), Jesus (Hermon and/or Tabor), Mahomet (the mountains near Mecca), Buddha and Brahma (Mount Meru) or Shiva & Parvati (the Himalayas). 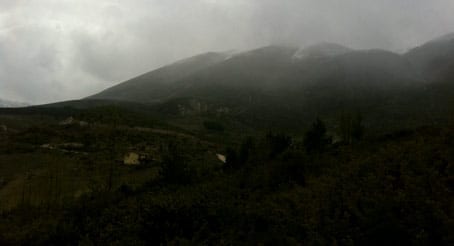 There are several walks leaving from San Pietro, ranging in duration from a 15 minute walk down into the valley to the nearby Acqua San Giovanni, Assergi (1½ hours) and for the more adventurous on to the peak that was named after the Pope in 2005 due to his passion for hiking in the area, Cima Giovanni Paolo II (c. 4 hours, @ 2425masl; the summit, previously called The Gendarme, was renamed during a ceremony on what would have been the Pope’s 85th birthday); the walks offer a wonderful variety of terrain, flora & fauna, with the gorse waiting to burst into aurulent splendour any time soon.

The spooky tranquillity of San Pietro della Ienca is set to be shattered on the 30th of April and the 1st of May when the village is providing a focal point for Abruzzo’s honouring of the beatification of Pope John Paul II in a variety of ways including a torchlit route, evening Mass with choir & organ, and on the big day itself a live broadcast of the ceremony from the Vatican followed by another Mass to be held in Italian & Polish.

Hopefully this event, although providing a probably welcome change of pace, will not however alter the serenity of the village permanently. San Pietro is a strange village, many of the houses seem to have been restored or partly restored relatively recently to a high standard, whilst others or parts thereof are in a state of disrepair. There are modern black, bulbous street lamps that look slightly incongruous, and the road in has been gravelled fairly recently (which caused our low-fronted Mini some problems!). But it is wonderfully positioned, and feels like it would make a great location as a sort of craft & artisan village, and it probably comes alive during either the ski season as it is only a 10 minute drive from one of the main skiing areas, or maybe the summer period for hiking & walking.

Abruzzo In Pictures – A Photographer’s Paradise