Top Posts
Sensazioni d’Abruzzo: A Visual Bucket List to Abruzzo
Re-enactment and an Elixir Recipe for L’Acqua di San Giovanni
A Pennese Summer Take on Pasta alla Genovese with Minted...
The Gran Sasso: Where the Peak Stops and the Sky...
Sagne, Guanciale and Broad Beans in a Pecorino Cream
L’ascolto e la visione Exhibition – A Priest’s Ethnographic Record...
Abruzzo Beach Bible – Blue Flag Beaches 2022
Escher in Abruzzo – A Trail of his Hilltop Towns...
Timeless Cocullo: Through Artists’ Eyes
Showing off the Good in Abruzzo
ExperiencesWalking in Abruzzo & Discovering its WildlifeWildlife

Italy’s May Poppy Riot in Abruzzo 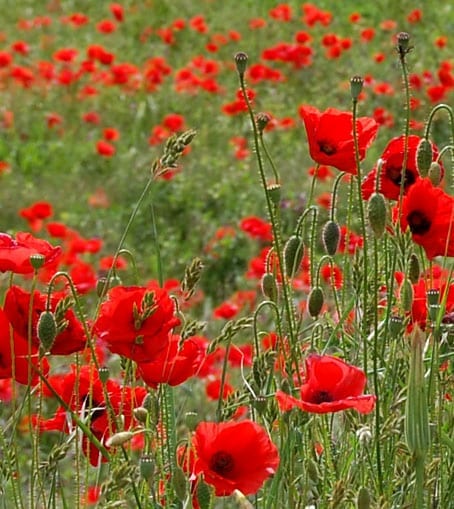 It’s rare when the most common is everyone’s favourite, but this is the case with the poppies in Abruzzo, Italy. Even when facing stiff competition from the mass of wildflowers and orchids that can be found on an Abruzzo spring day, poppies, officially regarded as weeds, are the flowers that most people mention after visiting.

Perhaps it is down to how they run riot up & down the hills in Abruzzo, pulling you to walk in the meadows and tugging at your heart as you see their wind dance amongst the wheat.

It could be the intoxicating contrast of colour and texture against the spikes of wheat as it mellows from its teenage green to crisp yellow, the poppies their scarlet crumpled women, with their paper thin blooms and flighty silky dark long lashes fluttering as they running amok against their ever-so-straight furrows.

Prato Selva – Perfect not just for Skiing but Biking...