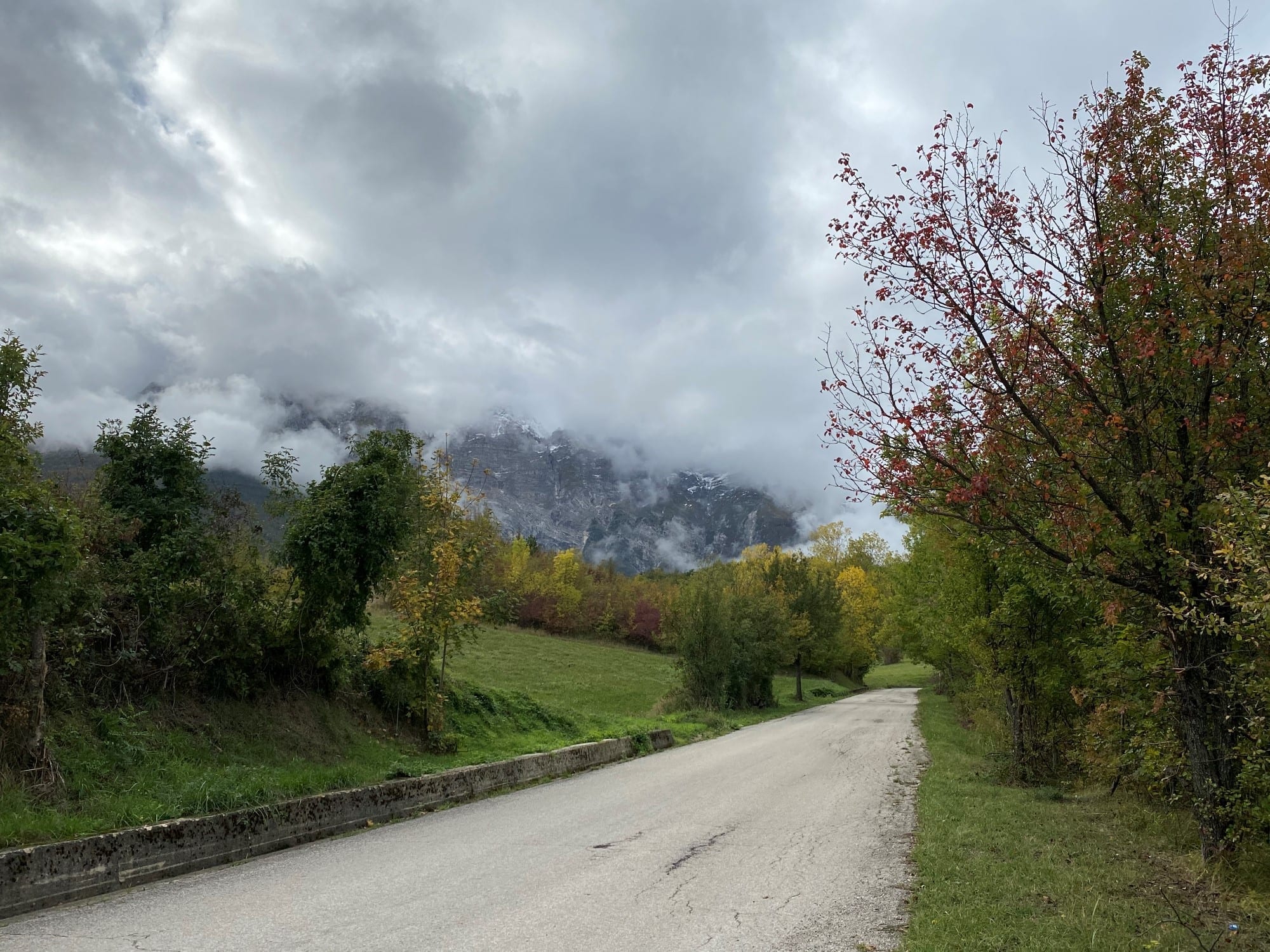 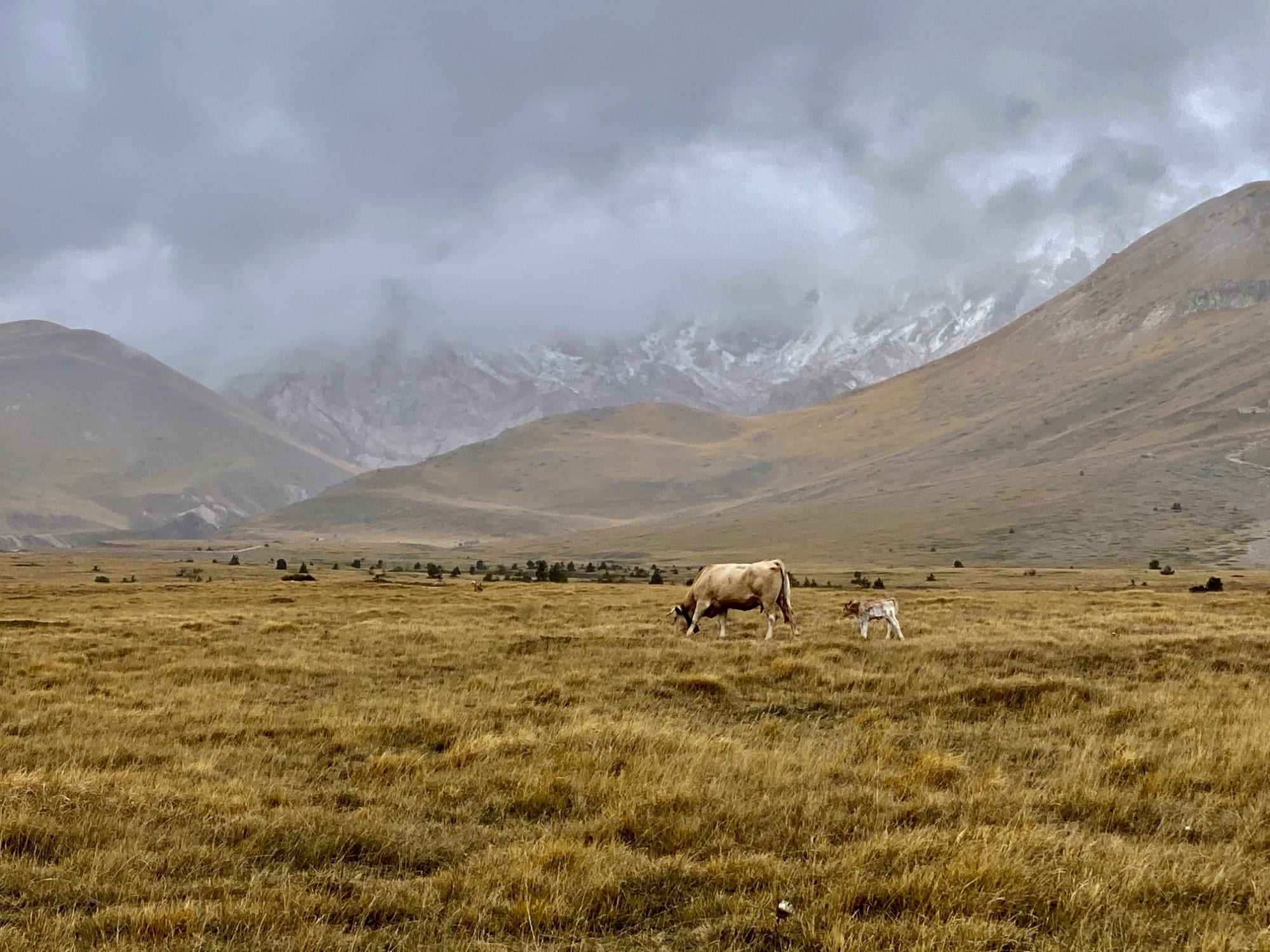 One of Teramo’s glorious Gran Sasso mountain passes, the sp37 begins under the belly of  the Majolica town of Castelli, snaking past the small town of Colledoro made famous by the restaurant Ristorante Luisetta, whose multi-course baccalà Friday is something not to be missed for fans of salt-cod.  This historical pastoral bumpy pass with more than the occasional pot-hole winds its way up, temperatures decreasing, mists increasing, the golden colours of  Autumn more intense every 100 metres you rise.  Vapours waft and seemingly dissolve like spirits into the beech trees that they hid less than a minute ago; it’s the land of fairies (or Siren Head as my Minecraft-loving son comments), whilst taking in on a less whimsical note the numerous Fiat Pandas parked squiffily on odd bends that point to hunters out trying their luck today.

We spot a clutch of patient donkeys, waiting under the trees; they’re still used used by the firewood  loggers deep in the woods whose muffled saws we hear as we push on with windows open, as we hope to remember this fresh air and spectrum of colours  once huddled around a smoky fire mid-winter.

There’s the tinkle of bells from sheep whose shepherd whistles to his dogs from the comfort of his own battered Fiat Panda, urging  his dogs and flock on up the mountainside.  We notice one limping and I remember another, more famous shepherd and maker of some of Abruzzo’s best cheeses, Gregorio Rotolo, telling me how the old and infirm sheep were historically left out to appease the wolves and bears.  This they can no longer do, each sheep is numbered and its life just like ours recorded in minute detail.

There’s a break in the cloud and we look out across and spot the deep blue of the Adriatic sea; we’re now in the province of Pescara, touching the outskirts of Arsita, host of Italy’s much acclaimed August folk music festival. Up we continue past Rigopiano, now known for its tragic avalanche rather than its stunning location, before we touch the lunar-like highland of Campo Imperatore.  This plateau was sculpted by the retreat of ancient glaciers and announces we’re in the province of L’Aquila.  We fork left for Castel del Monte stopping as 20 semi-wild horses trot down onto the road, its leader neighing it seems at the back to keep up.

We run into the first bar to order a thick hot chocolate to help fend off the damp chilly air of Castel del Monte, unusually home to a witch-themed sagra rather than the usual vegetable-aligned ones. The town’s bakers are famous for their delicious fiadoni pastries, and it’s a delight to be back to sample them.  Its restoration post the L’Aquila earthquake continues, only part of the town-hall and its tower have scaffolding left.  Despite the cold, geraniums still bloom and my son looks astonished to hear you can hire ebikes to ride down and around its medieval maze of steps and passageways.

We head back onto Campo Imperatore, catching a glance of Italy’s oldest fort, Rocca Calascio and on past the Rifugo Mucciante, famous as a DIY arrosticini stop, and the location of many a spaghetti western.   I point out the tragic statue of the shepherd who ignored September weather warnings of quick changeability and was lost with his children and dog, and then his wife as she searched in the blizzard for them all.  We sit and eat a slice of pizza that we bought for lunch from the village baker van that morning, and watch the flocks of crows/ravens, sweep across the sky, the wizened amber oat grass and remains of alpine flowers below them.  Corvo in Italian, means crow and once home we realise our lunch spot was looking onto Monte ‘Corvo’ one peak down from the Corno Grande. 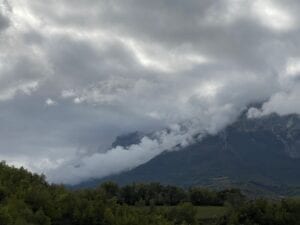 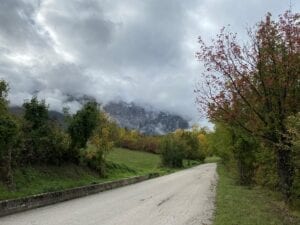 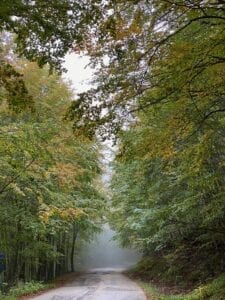 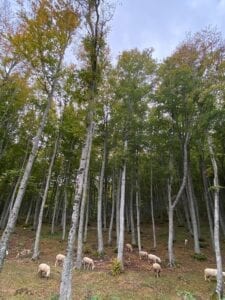 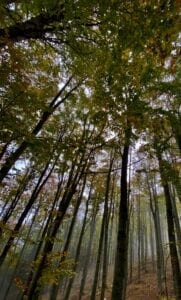 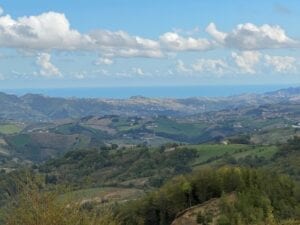 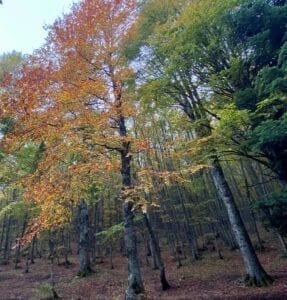 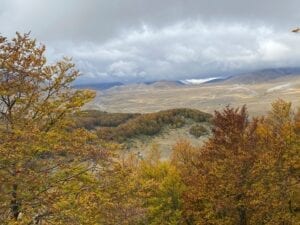 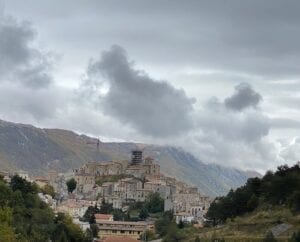 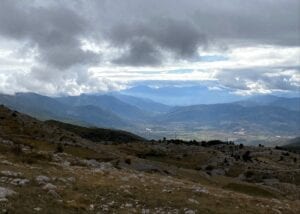 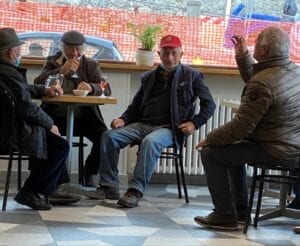 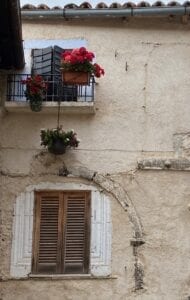 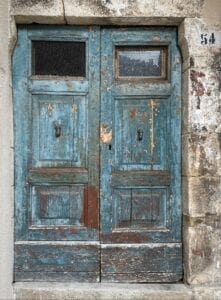 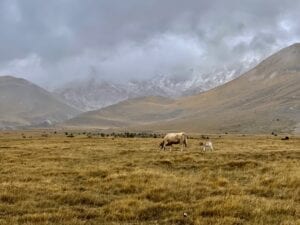 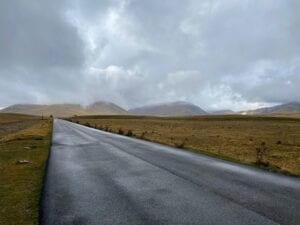 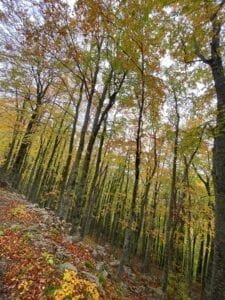 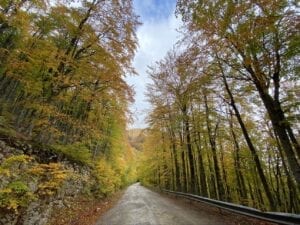 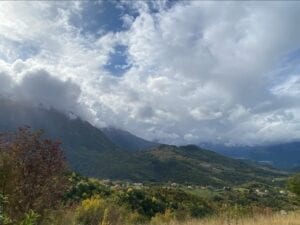 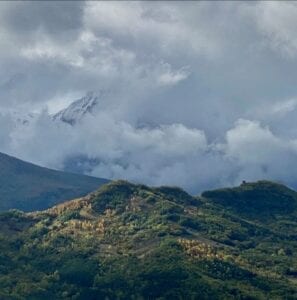 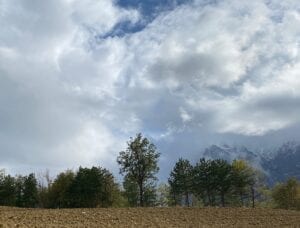 Donkeys Do It Better: A Family Trek Together in Abruzzo