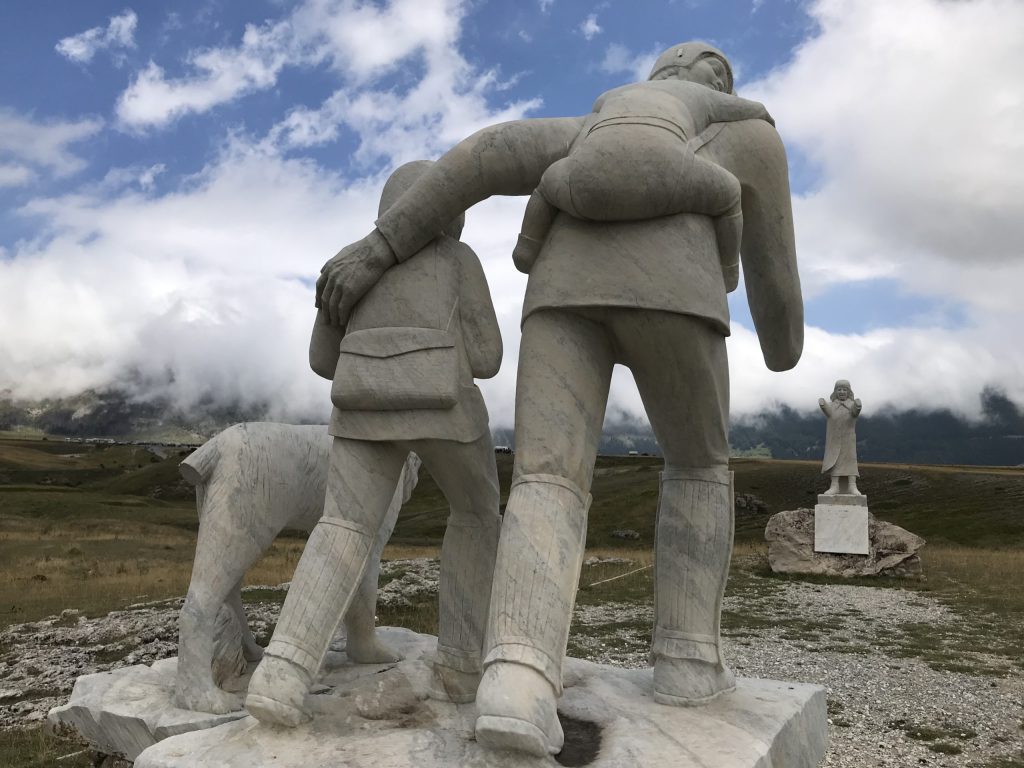 Shepherds are expert weather watchers, we all know their most famous ‘Red Sky at Night, Shepherds Delight’ forecast, but even they can be caught out high up in Abruzzo’s mountains when fog can descend and a blizzard or storm arise without warning.

The beginning of October 1919 was mild,  and the shepherd  Pupi Nunzio di Roio from Calascio had decided to remain with his flock up in the high pastures of Campo Imperato rather than heading down to the coast & Puglia, still the usual practice of  Abruzzo’s shepherds in the early twentieth century.

Whilst out with his two sons and sheepdog, a snowstorm blew up.  The combination of the heavy snow and cutting, freezing wind overcame both the family and flock at Vado di San Cristoforo (1675 masl)  as they began the descent towards Calascio.  When they hadn’t returned home his desperate wife attempted to look for them, dying from exhaustion and frostbite during her fruitless, and most painful of searches for her children.  Their still-frozen bodies were found in Spring the next year when the snows began to melt, and they were carried back to the local cemetery by donkey. 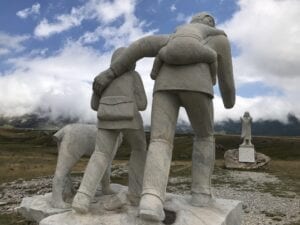 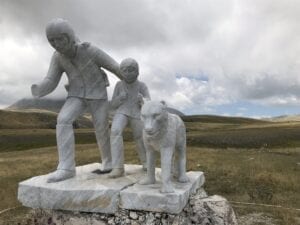 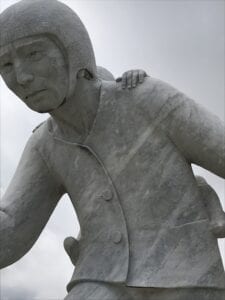 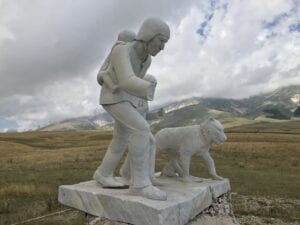 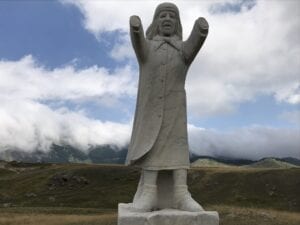 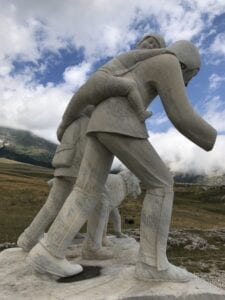 The white marble sculpture of the tragedy was created by Calascio sculptor Vicentino Michetti, (1909-1997).  He belonged to a family of builders but never abandoned art, his true passion.  His sculpture tugs at every parent’s heart and cause urban dwellers to re-consider the risks that shepherds took for their families to eat.

Despite shepherds helping to build Abruzzo’s economy through the wool trade, enough to have attracted the Medici Family to the region in their effort to control the wool routes (the transumanza) and create a base in nearby Santo Stefano di Sessanio, shepherds remain as poor as they were today.  An example of this is the price of wool – 1 kg of wool is bought for just €0.30.

How to View the Sculpture on Campo Imperatore

A permanent room at the Aurum in Pescara is available to view of works that Michetti donated to the region.

Thank you for this story. Enjoyed reading this history. My Father (Americo, 1888-1965) and his brother (Alfonzo) born and raised in Calascio/Abrusso. They departed Italy to come to America in the first decade of the 20th century. My father remained in the USA, my Uncle Alfonso returned to Italy. I have family that possess homes, in the paese. I also visit them, and always visit Calascio to visit the home of my father, observe the family name inscribed on the, now, abandon house, and to walk the streets in my fathers footsteps.

I was told that a very small few of courageous pisano’s remain throughout the winter, is that true?

What is the current population of Calascio?

What a fascinating story! How often did your father go back when he was alive?

The current population of Calascio, looks to be 113 http://italia.indettaglio.it/eng/abruzzo/calascio.html

I’m not sure of how many people are currently living there over the winter, so many villages and the smaller towns end up with a handful of residents. Looking at the total income I’d say a few!

Where in the World of ‘Abruzzo’…