What would a holiday in Italy be without a trip to an Olive Oil Museum; particularly one as interesting as the Loreto Aprutino Museo dell’olio in Abruzzo.  Housed in the most interesting & unique building in Loreto, its New Gothic style (almost unique for Abruzzo in our travels to date) is really worth a small visit, particularly as you get an intimate 1-1 tour included in your 6 euro ticket price.  What you won’t know about olive oil at the end of it isn’t worth knowing.

Loreto olive oil has the nickname of liquid gold and still ‘oils’ many a palm in the surrounding area.  This small Abruzzo town’s wealth was built & maintained due to the production of its high-grade olive oil; everything about Loreto has a starting in olive oil.  Its patron Saint Zopito is famous for being martyred in Rome and bought to Abruzzo in an urn to be interred nearby.  As his remains passed by Loreto, a white ox knelt down in homage and from the C17th those associated with the olive urns, requested the protection of San Zopito for the safety of their ‘liquid gold’ as it made its journey across the different states within Italy.

The olive oil museum building was built in 1880 as an olive mill by Raffaele Baldini Palladini.  He was a local landowner whose love of the arts led not just to such a novel and radical design for a functional mill building, but whose equal admiration for the world of science ensured that within the late 1800s his olive mill led the way in its understanding of how to create a superior product that lasted; the olives need to be pressed immediately upon picking and under hygienic conditions.

Raffalele was absolutely devoted to the olive oil he produced, there was nothing he considered too much for the promotion of his liquid gold. Bohemian cut-glass bottles were crafted for use for the oil at the trade shows, not known in those days that the biggest enemies of olive oil are light & oxygen (don’t decant your olive oil into transparent glass vases etc, it will kill those precious health-boosting anti-radicals).In the basement of the building, you can see a variety of the original olive oil presses that were used up until 1920.  The pulverising millstones that were pulled by a blinkered pony all day, leave you thinking about what kept the poor things going round & round all day dizzily pulling those weights, and you can only imagine how tired the ponies must have been by end of November.  There aren’t any videos or interactive bits & pieces in the museum but just looking at the millstones, the shoots whilst listening to the great talk by the museum’s curator Sandra and you really don’t miss it. 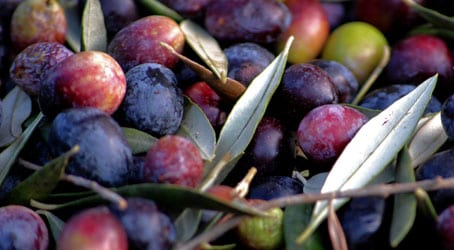 If you visit Loreto in late Autumn you will see bountiful Abruzzo olive trees laden with green, black, and purple jewels or all the colours of a nice bruise!   No the trees aren’t having an off year but are probably Dritta olive trees, infamous Loreto olive trees whose fruit really don’t mature uniformly.  The advantage of this is that when pressed a natural blend results in a subtly piquant and grassy flavoured olive oil.  Remember Abruzzo is acclaimed for being the originator of bruschetta, so if toasted bread is good enough to eat just with a drizzle of Abruzzo olive oil they must produce great-tasting oil.

Try asking for Loreto Aprutino DOC oils from your supermarket or deli, especially as their lovely Dritta trees stop the need for added food miles, no 3rd party olives are needed to be imported to create the perfect blend.  A strange but true fact of Italian Extra Virgin Olive Oil is that it imports more than it produces; olives from surrounding countries including Tunisia & Greece are used in its ‘Extra Virgin Olive Oil’ blends which are then exported overseas.  If you genuinely want an Italian Extra Virgin Olive Oil make sure that what you buy has a DOC stamp on it, that guarantees that all its contents are from only that specific area – the wonderful taste is worth the extra that you will pay for it.

Tours are able to be given in Italian, English, French & German

How to Travel to & Around Abruzzo by Plane, Train, Bus & Car

A Stop in Sulmona to See Abruzzo Traditional Dress