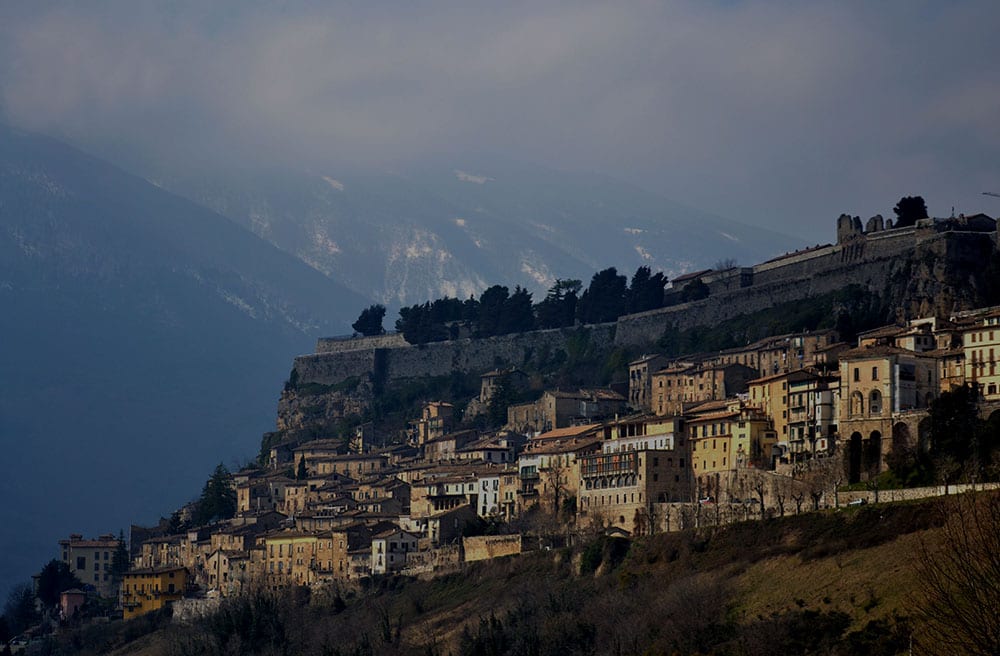 The fortress at Civitella del Tronto is Italy’s highest fort and worth a historical ramble back in time.  It was the last Bourbon bastion which Vittorio Emanuele II of Savoy squeezed by a siege from Oct 1860 ending 20 March 1861, 3 days after the official unification of Italy.

Approximately 15km north of Teramo is the hill-town of Civitella del Tronto, a 16th-century town that grew up at the time of the Spanish domination of the area, around the magnificent Bourbon ‘Fortezza’ (fortress) that dominates its skyline.

This massive fortress (590 masl), one of the largest in Europe at 25,000 squared metres, can be dated back to 1069 and has survived many assaults, before finally succumbing to the Piedmontese siege in 1861, one of the last bastions against Victor Emmanuel II’s pursuit of a unified Italy. The town itself is on the list of Italy’s most beautiful towns (I Borghi più Belli d’Italia)  and a delightful maze of little cobbled streets, dead ends, and mysterious stairways, as well as an unusually high selection of restaurants and cafes – possibly to sustain all the nuns running silently with poise and dignity back & forth from the convent…

One of the mysterious stairways eventually led us to a large stone entranceway to the fortress itself. The scale and order of the place is remarkable after the piccolo corsie of the town; you ascend a thigh-achingly long, walled-in ramp to the ticket office, buy your tickets (€7 I think) and then continue upwards to the main palazzo, where the relatively intact shells of the Governor’s house and the Church of San Giacomo stand. From there one can travel the length of the fort via the parapets, or via the internal courtyard. The fort has a museum. containing ancient armour & weapons, and maps, an art gallery and “bottega”, as well as a chamber containing some rather bizarre modern sculptures of a military nature.

Walking the length of the fort it is easy to appreciate the strategic advantage of the location, and the feeling of near invulnerability the structure would have lent its residents, though no doubt the smell of damp (and worse…) would have been far more invasive then! The military history of the place gives a fascinating insight into the history & development of Italy itself and can be seen in considerable detail at the official website (see below). The views from the fort are amazing, looking out onto the Montagna dei Fiori, Campli, Monte Ascensione and even the Adriatic.

Medieval Fragments & Lunch The Orsini Would Have Approved

Rocca Calascio – a Fort Worth a Walk to