Since the middle of Oct and on past St Martino, I’ve felt a slight danger of becoming “olived-out” courtesy of all the omnipresent olive-based conversations…that is until an olive sagra down in San Vincenzo Valle Roveto!

Olives it had seemed were the only thing worth talking about lately; fascinating, and I adore olives, especially the fat juicy roasted olives that my local veggie van brings at this time of year, and the newly pressed oils, but the adoration of this ex-city dweller who now lives deep in the mountains under the Corno Grande doesn’t stretch to the decidedly unromantic reality of olive picking.  Hence we have no olive trees, just a simple little terrace which is enough to grow some tomatoes and plenty of fragrant colourful flowers to watch hummingbird moths come and dip into.

This no doubt sounds akin to worshipping the anti-christ to those who move to Italy to re-create an Italian version of The Good Life… but I don’t feel bad, nor guilty about this statement, in fact quite the opposite, different strokes for different folks and that; but what it does mean is that I do get out there tasting lots of different olive oils throughout the year as I journey about exploring Abruzzo.

I’ve tried so many excellent olive oils in Abruzzo ranging from my neighbours’ beautiful grassy & green tomato-hinted oil, which was amazing, through to the region’s most renowned, made from Loreto Aprutino’s multi-coloured Dritta olives, both of which are on my Top 10 of most rated olive oils.  With so many competing wonderful Virgin Olive Oils, it’s almost possible to become indifferent to something that is so cherishable and can make the simple difference to a bland bruschetta and a great sauce.  However, my recent olive fatigue vanished after visiting San Vincenzo VR down on a deep southerly spur of L’Aquila where it meets Lazio, at their olive oil sagra.  It’s an annual event held usually the weekend after San Martino (3rd weekend Nov) and their local olive oil almost blew me away.

San Vincenzo Valle Roveto, formerly known as S Vincenzo Vecchio, has long been a village, growing into a town (also now the name of the Comune) that was destroyed and then rebuilt in the earthquake of 1915.  Like all modern towns, it’s not gorgeously cute; for some strange reason it made me think of the film The Deerhunter, maybe it’s the grid layout or style of housing that is a bit tired.  No rose-coloured spectacles here of the hardness of local life, but its surrounding landscape as in any mountainous region of Abruzzo is outstanding.

What S. Vincenzo Valle Roveto lacks in urban planning beauty it more than makes up for in its phenomenal, bio-dynamic olives that have been planted high up on terraces in the nearby mountains.  It is an incredible vista looking at these silvery-green leaves that form the tree line, intermingling with the usual golden-brown Fall canopy below them, and what seems emerald grass that stretches out under the trees to provide a more unusual mix of colours than that normally seen in autumnal Abruzzo.

These endemic olives are known as Monicella, and are picked between the 20th Oct and 20th December –  a later maturing olive no doubt due to their geographical location and poorer soil type.  Their flavour is quite extraordinary and nothing your mouth can be prepared for; the oil they produce explodes with a spicy hot green almond artichoke flavour that almost leaves a fire as your jaw drops and “wow” is emitted.  Your mouth amazingly feels that it’s just been led on the naughtiest Tango by this oil and nothing will ever be quite the same!

Food at the sagra was superb, as to be expected; bruschetta delicious, pasta fagioli great, what really caught our attention was the rosemary-stewed Mutton that was served in almost a soup of this olive oil.  It worked brilliantly, the intensity of the tender moist mutton itself matched perfectly by the flavours from the oil to be soaked up with bread; who needs complicated food when simple dishes can work so brilliantly? 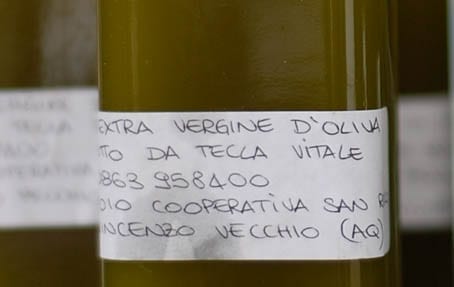 If you can’t visit the town’s producers you can now adopt an olive tree from this area and be shipped oil & soap and other sorts of lovely things.  The community received an EU CAP farming grant to help them set this up and as their olive oil is just so unique I’m going to promote it as much as possible, as the world and all gourmet olive oil lovers need to try this.  The starting price is €60 for 4 litres (+soap, plaque & certificate of adoption with photo) isn’t bank breaking!

Scenting the Truffle at Campovalano’s Sagra