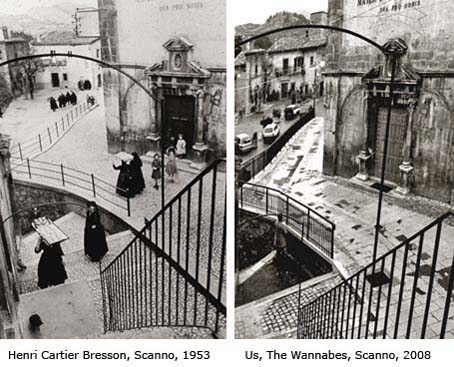 Immortalised by such renowned photographers as Henri Cartier Bresson & Mario Giacomelli (in the latter’s “happy dancing Priests” series of 1957), Scanno is Abruzzo’s cultural hot-spot and can lay claim to being its most photographed large medieval village, and host to its most beautiful women according to Edward Lear (Owl & the Pussycat fame). 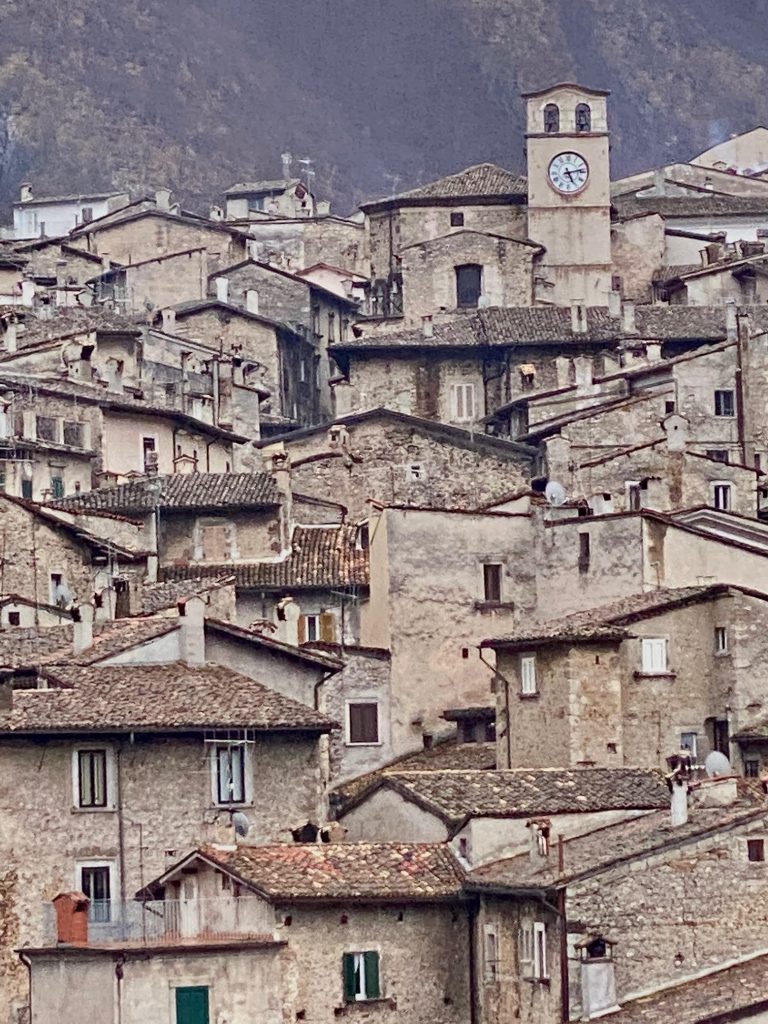 It sits 1050 masl in the impressive Sagitario Valley, encircled by the Majella Mountains and with easy access up to the ski resort of Monte Rotondo. Lago di Scanno, a large well-stocked pike & perch aquamarine natural lake, is Abruzzo’s largest natural basin, perfect for summer walks but a bit cold in the winter to ‘ramble’ around unless you are a serious hiker. It’s a perfect Abruzzo location to visit for skiers, photography buffs and of course fly-fishermen (though don’t expect any mountain trout, they’ve long since been over-fished). 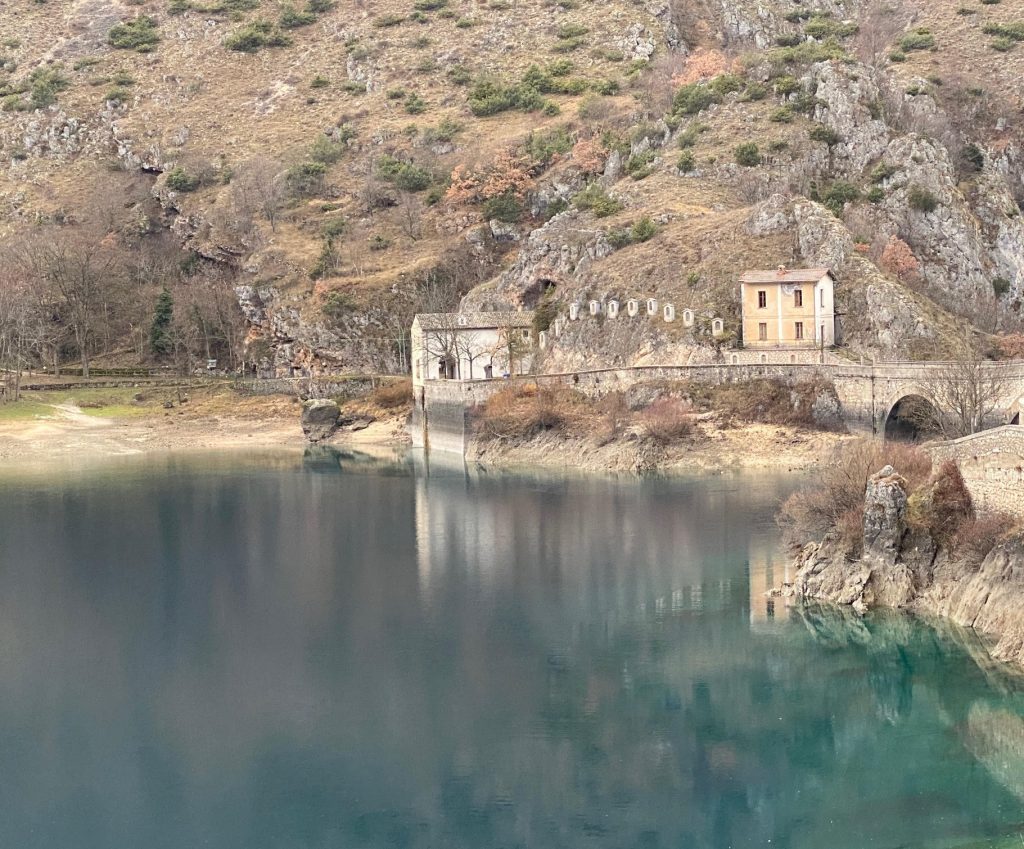 According to legend, Scanno and its lake were created by the competition between a white witch and a sorcerer who lived in the Sagitario Valley. The good witch, Signora Angiolina, argued with her friend the sorcerer until it quickly escalated into a war of sparks & curses. Finally, the sorcerer turned to Signora Angiolina declaring “Where you fall, a lake will be born!” Upon which the proud witch retorted, “And where you pass, rocks will rain down!” The good witch fell and Lake Scanno was born. The sorcerer passed nearby the mountains and rocks fell around the lake and Scanno the village grew.

Outside summer high-days & weekend ski-holiday time a walk around this large village feels that you have walked onto a deserted film set. Gentle tinkles from the bells of mountainside sheep bounce off a maze of C11th portals. Staircases that descend into the alleyways push & pull you around a host of historic & quaint piazzas, built to display the wealth of their occupants.  It’s no wonder that Bresson’s Harper’s Bazaar Christmas shots of Scanno were photographed a year before they were published; they were still perfect to represent a town that has stood still and has subsequently flourished for this very timelessness.

Scanno’s historic wealth derives from its pastoral fortunes which even allowed its inhabitants the luxury of developing the fine gold filigree jewelry craftsmanship that is said to have been bought with them from Illyria (present-day Albania). 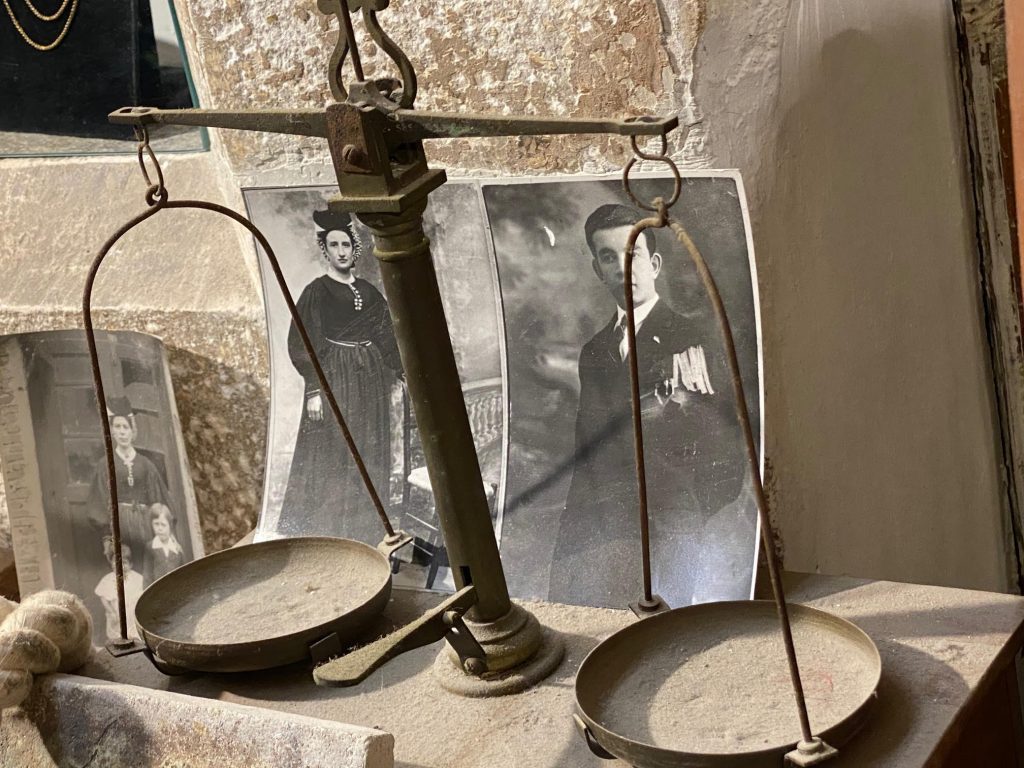 Like most of Abruzzo, Scannese women play a pivotal role, the men after all were away 9 months of the year tending up to 130k sheep and marching them down to Apulia in the south for winter grazing.  The women were left to spin and weave the infamous black fleeces ready for sale.  By 1543 they had done so well they could afford, in a display of gratitude, to wear their world-famous long black pleated skirts and bodices which weigh a staggering 12kg – imagine that on your back when you’re cleaning. On top they wear brightly embroidered decorative aprons rather like any ‘old school’ Signora, but which shout Asia Minor rather than Mainland Europe.  On their heads, they wear a coiled embroidered fez -like hat, originally useful for helping to balance on their heads the baskets of fleeces.  Go past the museum and see dolls wearing this traditional costume but don’t expect to see anyone on non-festival days wearing this heavy regalia.

Worth a try is the delicious artisan bread Pan dell Orso (Bear Bread), this is a sweet almond cake that was baked by the women of the village to help their husbands remember them and to tempt the local bears away from eating either said husbands or even more importantly valuable flocks.  Today it is dipped in a light covering of bitter chocolate… yummy!

Sadly like so many churches in Abruzzo, the churches were all locked tight when we tried to enter on a Monday (that actually applies to most of the town, Monday is its day of rest).  You can arrange with the local tourist board to gain access, worth a try as they are supposed to be quite beautiful, no doubt thriving from the town’s wealth up until the 1930s…

Recommended Eating Out in Scanno:

We had lunch in a trattoria called Vecchi Mulino.  Beautiful Courgette & Saffron Ravioli followed by Proscuitto, saute potatoes with plenty of rosemary and fried Scamorza.  This is an Abruzzo cow’s milk cheese that is a little like Mozzarella in that it is stringy but which has been aged for 12 days so it’s colour is yellow rather than white – delicious!

Don’t visit if it’s raining, the grey stone of the town intermingles a little touch much with the clouds and a sense of misery can easily result.

Scanno Ladies in Black Image ~ this is part of an photograph has been reproduced on this site with grateful thanks to Matteo (Teobius)- click here to see the original image in all its glory.