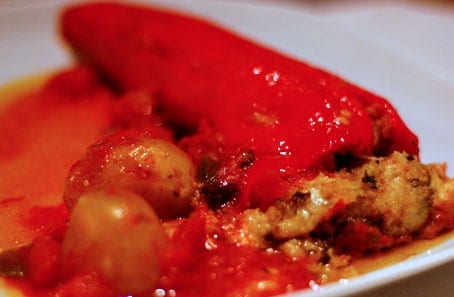 Stuffing must be one of the most universally loved foods on the planet, I’ve never found one person who doesn’t love it for its comfort value or taste, and the sheer variety of what you can put into it to transform a base ingredient into a show stealer, as well as making it stretch a little further… the latter for Abruzzo cuisine being an essential economic root & stalwart of regional cuisine.

Recently we spent the day on an Abruzzo cooking course in the beautifully restored Palazzo Tour d’Eau run by Abruzzo Cibus down in hilltop Carunchio where Southern Chieti touches Molise, the palace’s natural air conditioning much appreciated by the whole class in the summer heat.   I have to confess to not being too excited by the notion of learning to make stuffed peppers, maybe it was thinking back to my own mother’s wrinkled green bell peppers with a dry yet greasy mince filling… however the recipe and result was so good that, without trying to sound like some hideous TV endorsement, we made them again at home 2 days later!  We loved the  Chef’s idea of this almost being made into a one-pot dinner by adding some parboiled potatoes in its rich tomato sauce as they roasted in the oven.  It’s that rich sauce that counters all signs of that hateful wrinkled pepper skin syndrome.

One tip from our cooking teacher was to try and buy whenever possible red or orange ‘cornetto peppers’ – the small horn shaped peppers,  simply because they have a richer sweet taste and are better for digestion.  I liked them as they don’t go baggy and well look so beautiful as they bend on the plate instead of that squat bell pepper look that are always so difficult to eat… Thankfully, they’re widely available in Abruzzo and a common weekly veggie shop for us and even during a recent sojourn to the UK we spotted them in the local green-grocers , but you may have to hunt them out a little outside Italy. 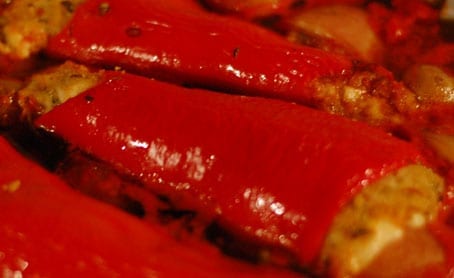 Preheat the oven to 180°C /375°F.
Prepare 4 to 6 medium peppers (preferably cornetti), red/orange. Cut off the tops and remove the seeds and the trim the ribs on the inside. Wash out the insides and season with a little salt. Let dry.

Thinly slice the prosciutto or your choice of cured meat and sweat a little in a frying pan with a drizzle of olive oil.  Combine all the above ingredients in a large bowl and set aside for 15 minutes or so for the mix to absorb the olive oil and to season.  If the stuffing still feels a little dry (it depends on your bread) then add a little more olive oil.
Carefully stuff the peppers using a spoon & your fingers(!) to ensure that the stuffing reaches the tip of the peppers.

In a casserole dish, add the chopped tomatoes and spread evenly. Add the remaining ingredients, except for the water. Arrange the peppers in the casserole trying not to let them touch each other; this is where you can use the parboiled quartered potatoes to separate each.
Add enough water to come half-way up the sides of the peppers. Bake for approx 45 min.
During the cooking process, add a little water if necessary (if the sauce thickens too much).  The peppers will soften and start to brown and the stuffing will ooze out somewhat.
Remove from the oven and let rest for a few minutes. Sprinkle with fresh parsley.
Serve hot or at room temperature. Drizzle with a little olive oil if you like.

Due to Il Volo and their member Gianluca Ginoble my attention was drawn to the region of the Abbruzzo. One of the fanpages of Il Volo keeps us informed, also about the cooking of this aerea.

This recipe Pepperoni Ripieni sounds very good and is written very invitingly. The Author Sammy Dunham has got an interesting history. Very promising for the future!

I am looking forward to more interesting information about the region!
Thank you!
Geerti Frank from Germany

I too just returned from Abruzzo Cibus cooking classes last night and searched for this recipe to make for my husband tonight since it was so delicious. I was pleasantly surprised to find it online while awaiting for the recipes to be sent to us by Massimo and Dino-thank-you!

They're gorgeous aren't they, especially good in Autumn when it gets nippy. Yes the Abruzzo Cibus class we had was v impressive, the great tuition and setting made a lovely day