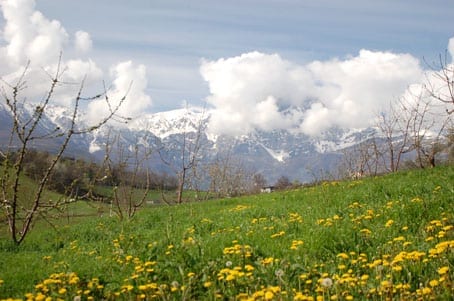 There has been a lot of demonstrating in Abruzzo recently against the central Italian government. Firstly against its sluggish restoration of the city of L’Aquila, which if you believe foreign newspapers is deemed the new Pompeii, and secondly the people of Abruzzo’s fight to stop oil drilling in the region, which threatens Abruzzo’s 2010 cherished title of “Italy’s Beach & Mountain Babe”.

In the first quarter of 2010 Abruzzo was announced as the place to visit in Italy by the world’s leading English-speaking newspapers.  All ran in-depth travel articles which highlighted its untouched qualities, wonderful heritage, and fabulous cuisine:

Whereas the world’s travel editors champion Abruzzo’s geographical resources, traditions & heritage, helping to foster a sustainable long term local economy via the tourism industry, this is being challenged by Berlusconi’s central government via their attempt to overturn an extension to Abruzzo’s 2009 regional law declaring a ban on onshore oil extractions.

This law came into effect after a 2-year moratorium (ban) ceased on ALL oil & gas mining onshore and offshore within Abruzzo.  Despite appeals & petitions from the WWF, the Catholic Church and each of Abruzzo’s province councils & chambers of commerce from all branches of industry, Abruzzo’s regional President, a member of Berlusconi’s Forza Party, introduced legislation to allow the offshore drilling of oil and gas just 3km from Abruzzo’s famous coastline whilst banning inshore drilling.  It is this inshore drilling ban that Berlusconi now wants to overturn.

If this regional law is overruled it will transpire that 49% of the region that includes:

and, equally importantly, where 80% of the people of Abruzzo live, will be designated an oil exploration site for low-grade oil, imposing all manner of long-term health issues on future generations. Income earned by the people of Abruzzo will be less than 1% of revenue after income & national tax has been deducted.

Beautiful under-populated Abruzzo may charm tourists and be the place to go for an off-the-beaten-track holiday, but to the existing Berlusconi government it represents nothing more than short-term economic gain, through the sale of its protected sites to international oil companies.

From the off-shore rigs, coastal tourism businesses and their suppliers will suffer as visitors find new places to sit on the beach with a view that doesn’t include oil rigs or a refinery, or worry what exactly is contained in that “fresh fish” supper. At the moment there are plans for rigs just 3km & 5km from the beaches within marine reserves, contrary to all EU laws.

Inshore, the fruits of Abruzzo farmland & national parks will not only diminish for those who sustainably farm nearby, but the subsequent sulphuric stench and fumes in the proposed wells will drive away those who might stay for a break at a sweet inland agriturismo. Who’d want to take a week’s holiday exploring local hill towns and walking in the national parks right next door to  an oil well?

For long-term regional sustainability, and particularly for the people & economy of Abruzzo for generations to come, we’d ask you  to join the protest rally in Abruzzo this Sunday 18th April that begins at 15.00 at San Vito Marina just outside Ortona

For those outside of Abruzzo, we ask you to write a letter today. It won’t take long, we can send you a template; all you need to do is add your address, print it off and sign it and send it to the Ministry of the Environment; it will take no more than 10 minutes but its impact could last forever, which is more than can be said of Abruzzo’s oil supply! And what will become of Abruzzo’s former clean and fine land & people then? 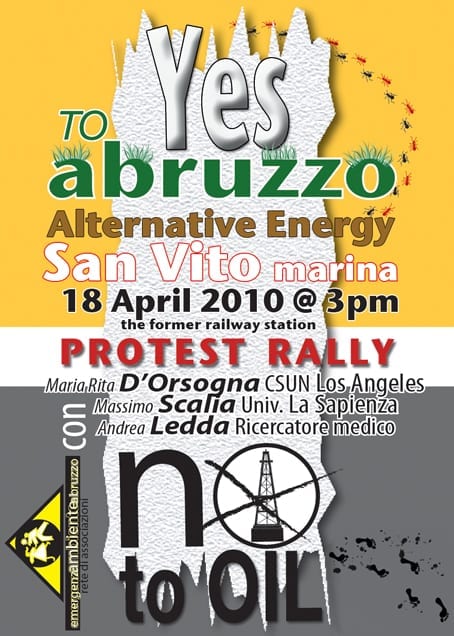