The Truth About Panettone 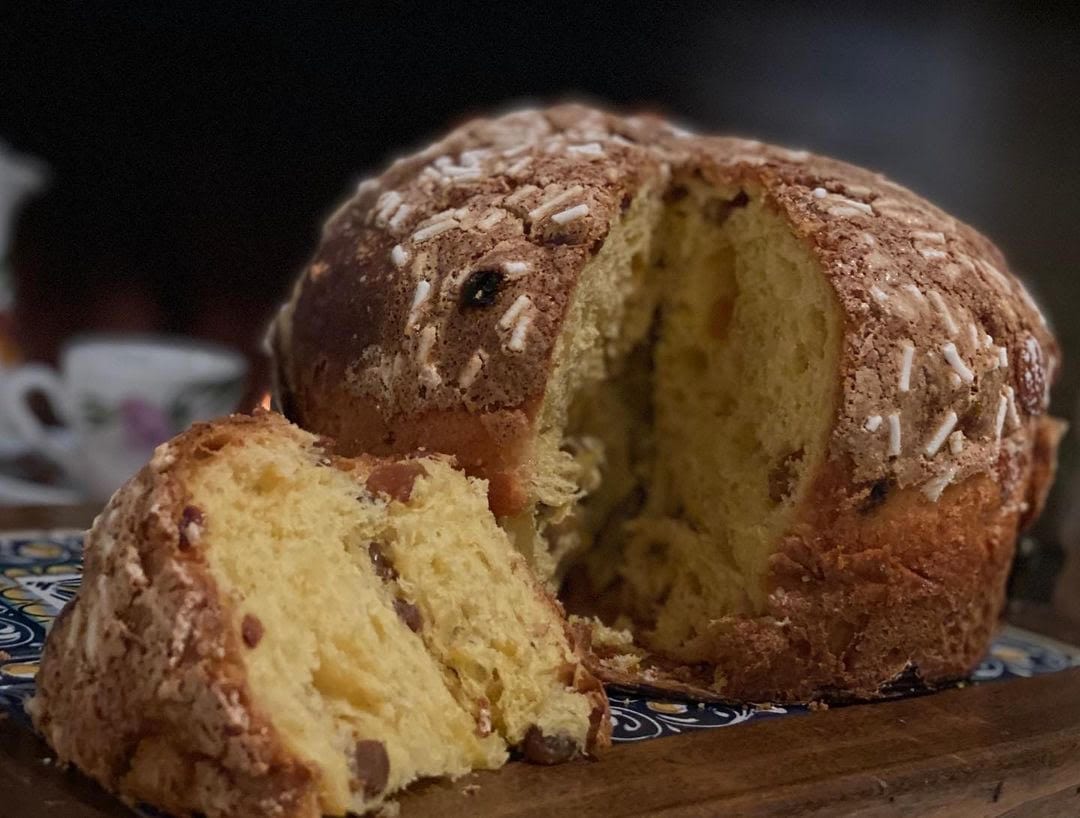 [vc_row][vc_column][vc_column_text]You may have a beautifully wrapped & decorated panettone, but how do you know if you’re eating the real thing and not a poor imitation!

It’s buttery rich, incredibly fragrant and never ever too sweet!.  Its conical outer has a slight crust, whose middle curls gently outwards into what is described as 4 ‘ears’, from where a cross has been scored into the dough before being baked.  Its soft middle has strands that have been described as coming apart like candy-floss, but retaining a slight chewiness, and the aromatic textural finale –  succulent dried and candied fruits.

I spent a day checking in and out with Abruuzzo’s famous panettone maker Eugenio Merlini at his bakery in Colledara (TE).  His extraordinary handmade panettoni reflect and celebrate the history and local ingredients of each town/mountain that his unique panettone is named after.  Each year he makes just over 3000 between the middle of November and Christmas that are enjoyed in Abruzzo and around the world!

Don’t Settle for a Poor Imitation

If you’re eating the real thing, it has taken 36 hours to make! In its ‘dough’ stage, each panettone is left to prove 3 times.  They are sour-dough based, which explains why each handmade one tastes a little different, as their lively ‘Mother’ yeast is created individually by each baker. Being sourdough also explains why they’re easily digestible, no industrial super rise yeast concoctions contained in these lovelies!  This is part of the reason why a ‘genuine’ one costs €25+ and once tasted one you never go back to those all cardboard, cakey sugar hag cheap imitations. If in doubt check the ingredients!

A Bread of Good Wishes

Its Milanese history starts in Medieval times, Christmas was the one time of the year that the poor majority ate ‘white’ wheat flour.  The rest of the year their bread was made with farro, rye and oat flour. Added to this was honey, pumpkin and raisins that represented good wishes for all that shared it.  By the mid-17th century, it was known as pane di tono (luxury bread), and a slice of this bread would be saved to eat, toasted and spread with butter on 3rd February.  This was the feast day of San Biagio (St Blaise) who is said to protect against throat ailments.

Its shape remained more loaf than cake until the 1920s. Post the Russian Revolution there was a sizable Russian community who had emigrated to Milan.  One emigre wanted to know if their much appreciated Easter cakes (Kulich), baked in a  cylindrical mould could be made by his new local baker, Angelo Motta. It gave him the idea to do the same with Panettone, surrounding the dough with paper to push it up and culminated in the 1950s with a ‘pirottino’, its famous paper cup that gives the panettone its shape and height!

Here’s a photo journal of Eugenio making one of his double chocolate Castelli Panettone and decorating the first Majella and Trabocco panettone of the season!  He proudly explained that Castelli isn’t just famous for its majolica ceramics but also as being one the first towns in Abruzzo to have ‘chocolate’,  This was due to the Spanish who settled there to teach and create the town’s Majolica.  He can trace his ancestors right back to just outside Madrid, going to show the beauty is all in the mix!

Fantastic article but have you ever heard about anyone who makes a vegan version ?

Oh thank you! Gambero Rosso wrote about vegan panettone a little while ago and came up with some recommendations. But lower your expectations, as from what it said in the article its’ hard to recreate without the eggs, the vegan pantettone were much denser. Eugenio does a lactose free one, he is doinga celiac friendly version next year but I’m afraid they all have eggs! It could be your challenge for 2021 make the best ever vegan panettone!

The Enticement of Roasted Peppers

Sulmona Red Garlic – Probably the Best Garlic in the...