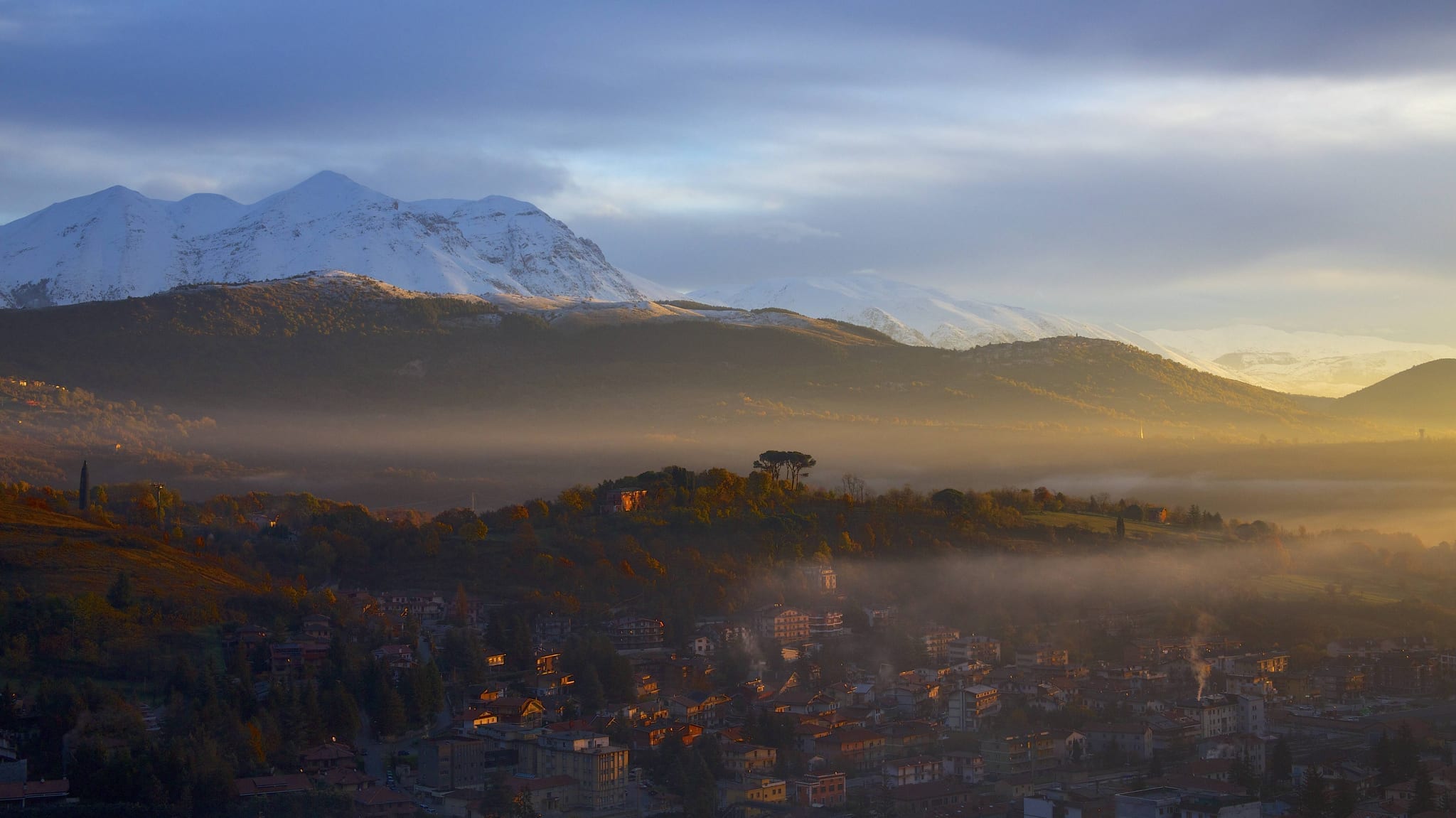 Like so many ancient towns in a modern world, Tagliacozzo may fail to impress if you happen to drive through the modern outskirts. But if you happen to gaze upwards, you will see enough to fire your imagination, and if you have the time you should pull over and begin a walk that will take you backwards through history.

“round the rock it climbs in a series of twining ladders, with successive ledges for palace, or church, or convent; till it pauses, out of breath, at the Calvary” (Anne MacDonell 1907)

From the tree-covered Piazza Duca degli Abruzzi, where the Thursday markets are held (…and this is quite a market. Divided into distinct zones, the hardware and housewears, the fruit and veg, the clothes and shoes and the fish, to the highly flammable, wood-fired mobile cooking vehicles that supply wonderfully roasted chickens and legendary porchetta. These vans can be found in the corner by the petrol pumps…) you can begin your journey by entering the old town through the Porta dei Marsi. You will be in the small Piazza Argoli, named after the town’s famous mathematician & astronomer (and more) Andrea Argoli (1570 – 1657). On your right is the Palazzo Mastroddi, where (among other things) Edward Lear stayed during his tour of 1843. You could go three ways here, but for now walk in to the main square, the Piazza dell’Obelisco. This is one of the best medieval squares in Abruzzo with some fine buildings, great loggias and my favourite bar (Obelisco) and restaurant (La Vecchia Posta). 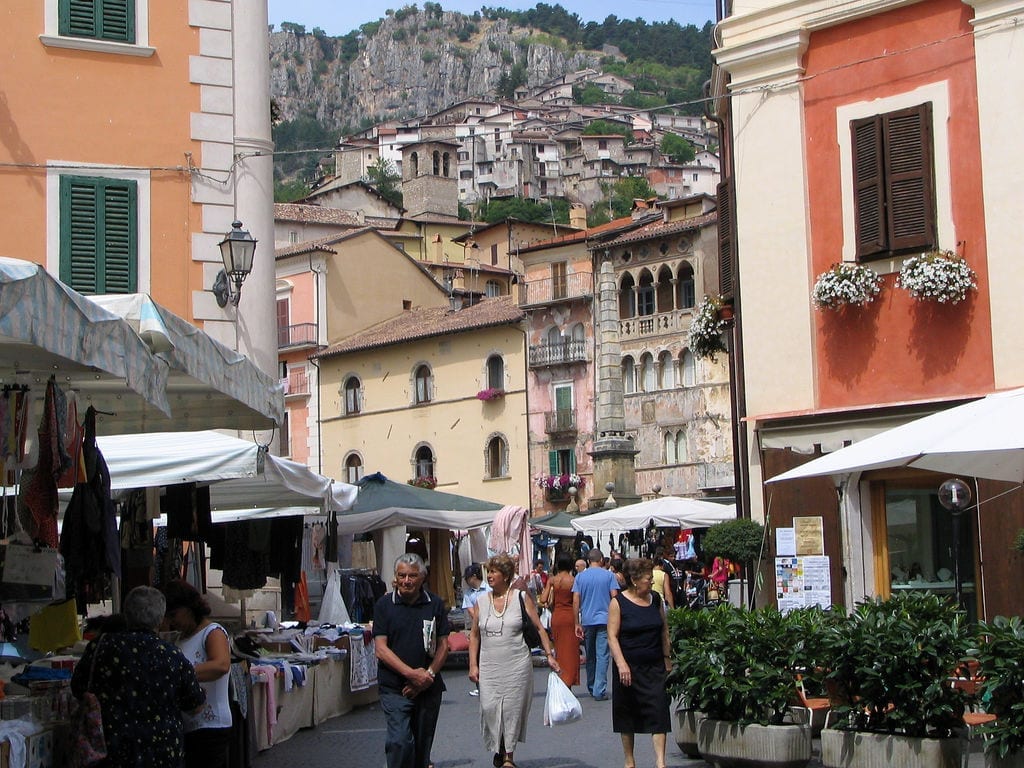 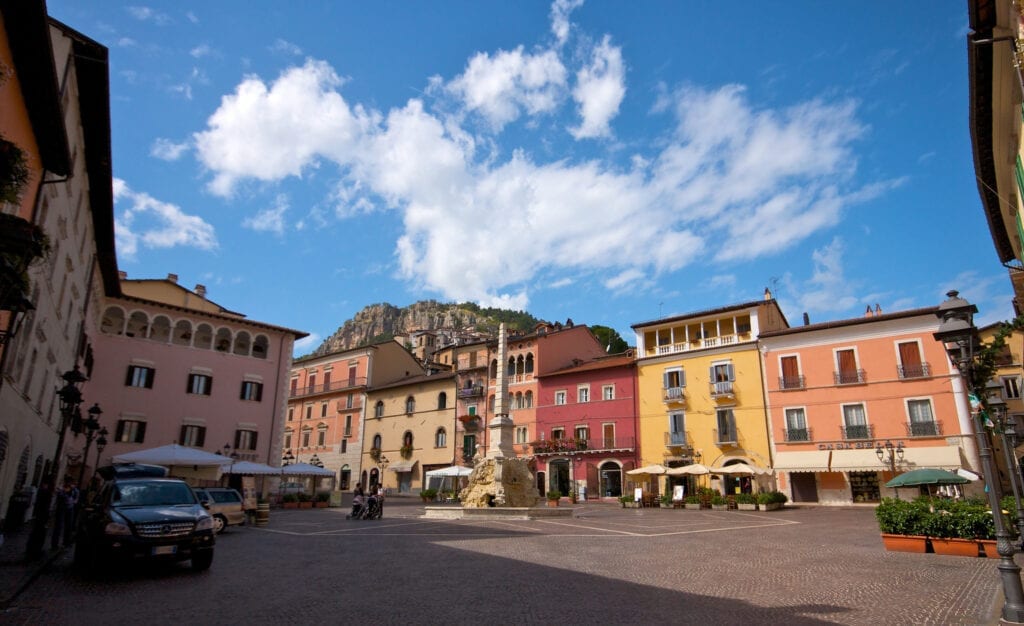 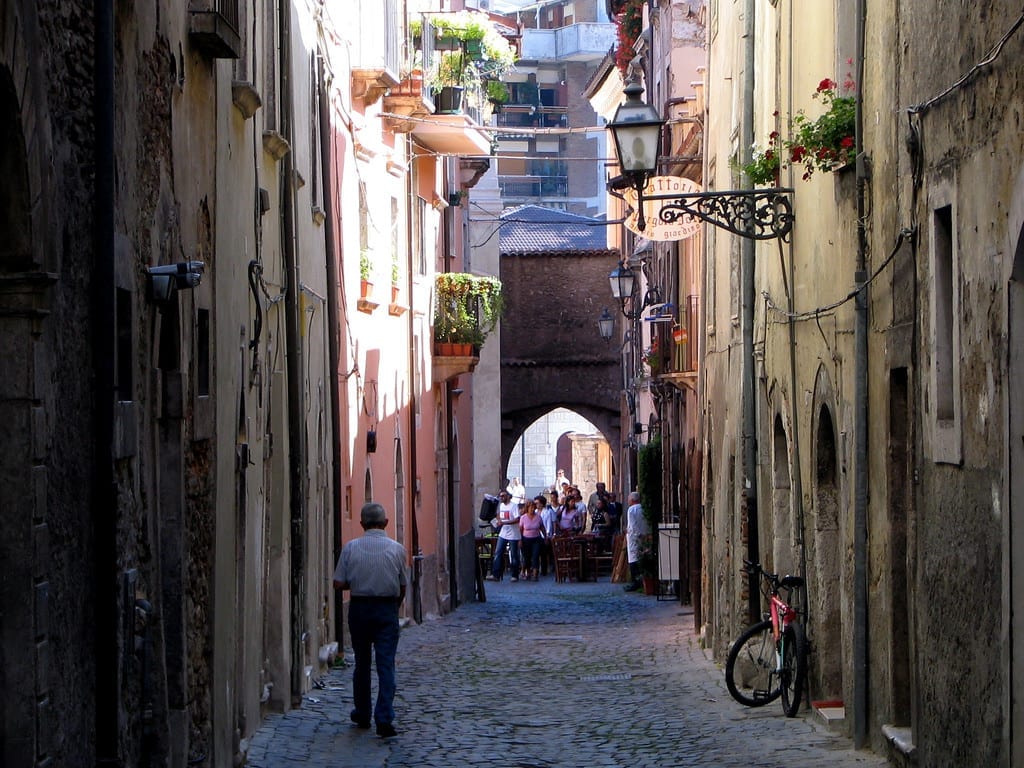 Cross the square and leave from the opposite corner, the narrow street will lead you upwards to the church of San Francesco (13th c). The entrance to the cloisters will face you, look up as you walk in! Remember, always upwards, and next you come to the Palazzo Ducale. For centuries home to the feudal lords (the Colonna, the Orsini) it’s now being renovated. The theatre is to your left, and just beyond the church and monastery of S.S .Cosma and Damiano (founded 8th c). Walk up the side of the Palazzo Ducale, up the Via Romana. It twists and turns, and there are hundreds of steps, but you will eventually meet the Via Valeria when you see San Pietro in front of you. On you right you can see the Porta Valeria (another of the five town gates). But go to your left and follow the Via Valeria upwards. You are now really in the old town that was built directly beneath the castle. 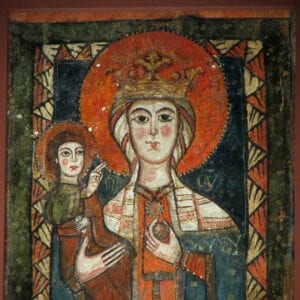 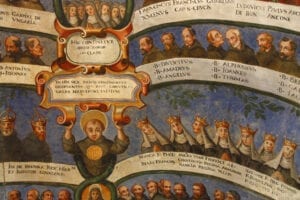 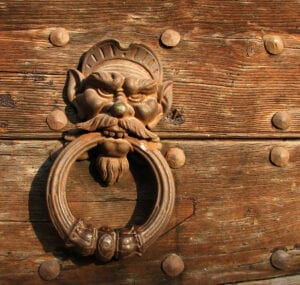 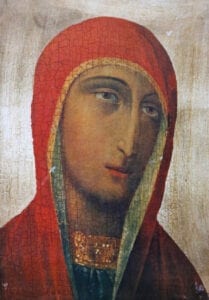 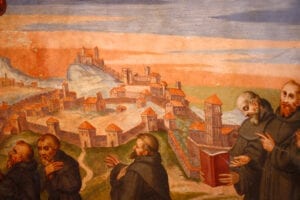 The road keeps climbing and you are always contained between the tightly packed dwellings. Look out for frescos, stone window frames, great doors, strange alleyways that go under the buildings, churches, decorative key stones in the arched doorways, and listen to the rushing of the river Imele below.

Leave the old town walls through the Porta Romana. In front of you stands the beautiful Santa Maria del Soccorso. The tale of brave young Corradino and the Battle of Tagliacozzo is quite another story, but you will see a reference to Dante’s account of in the entrance. The Calvary starts just to the right and leads you up to the little church that seems to be the very last and highest point of the town. But from here you see the castle on the rock. You’ve got this far, and you might be tired, but don’t stop now. There are many beautiful wild flowers on the way to the castle, and maybe a few horses too. 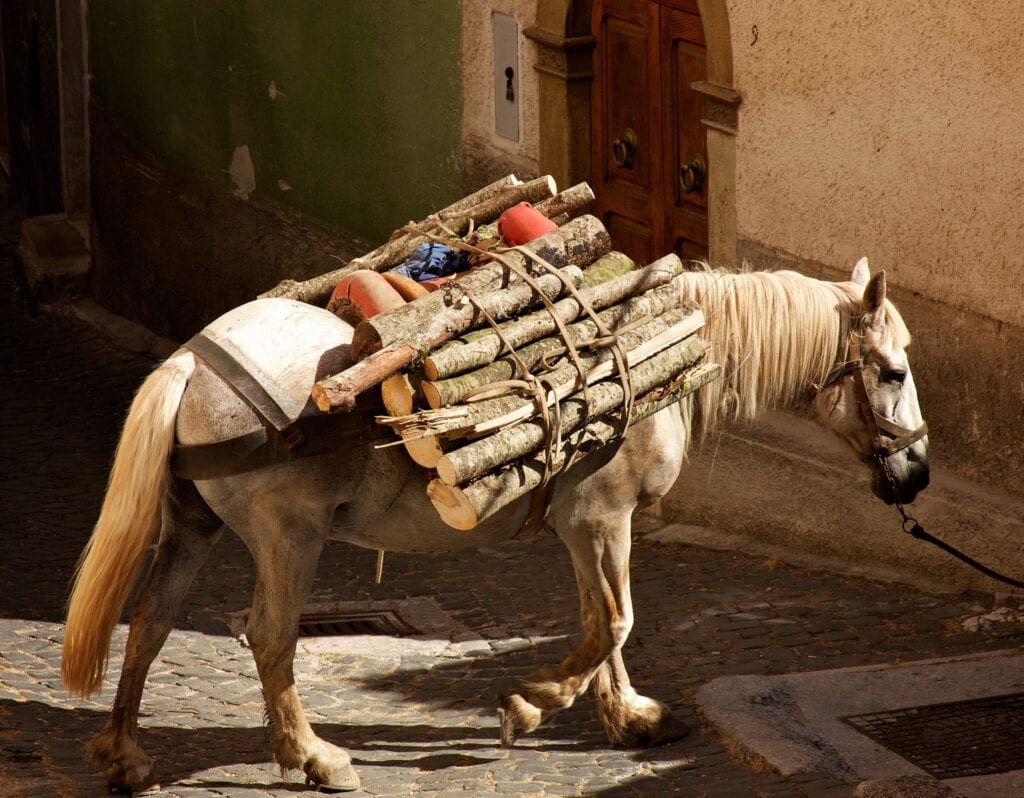 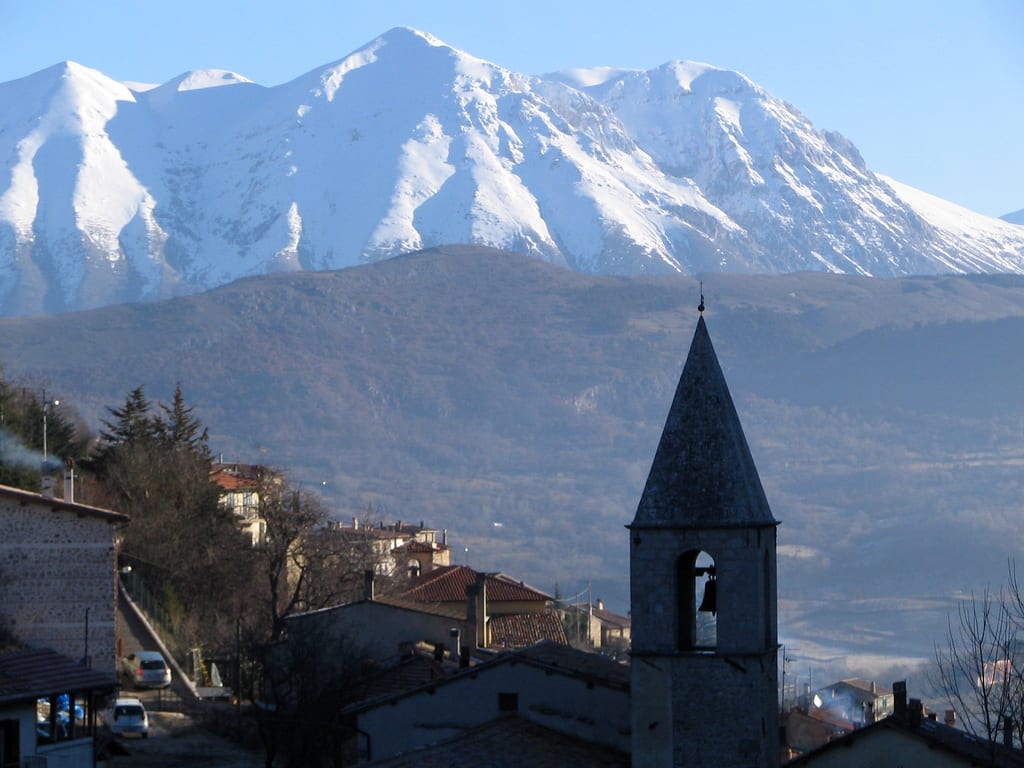 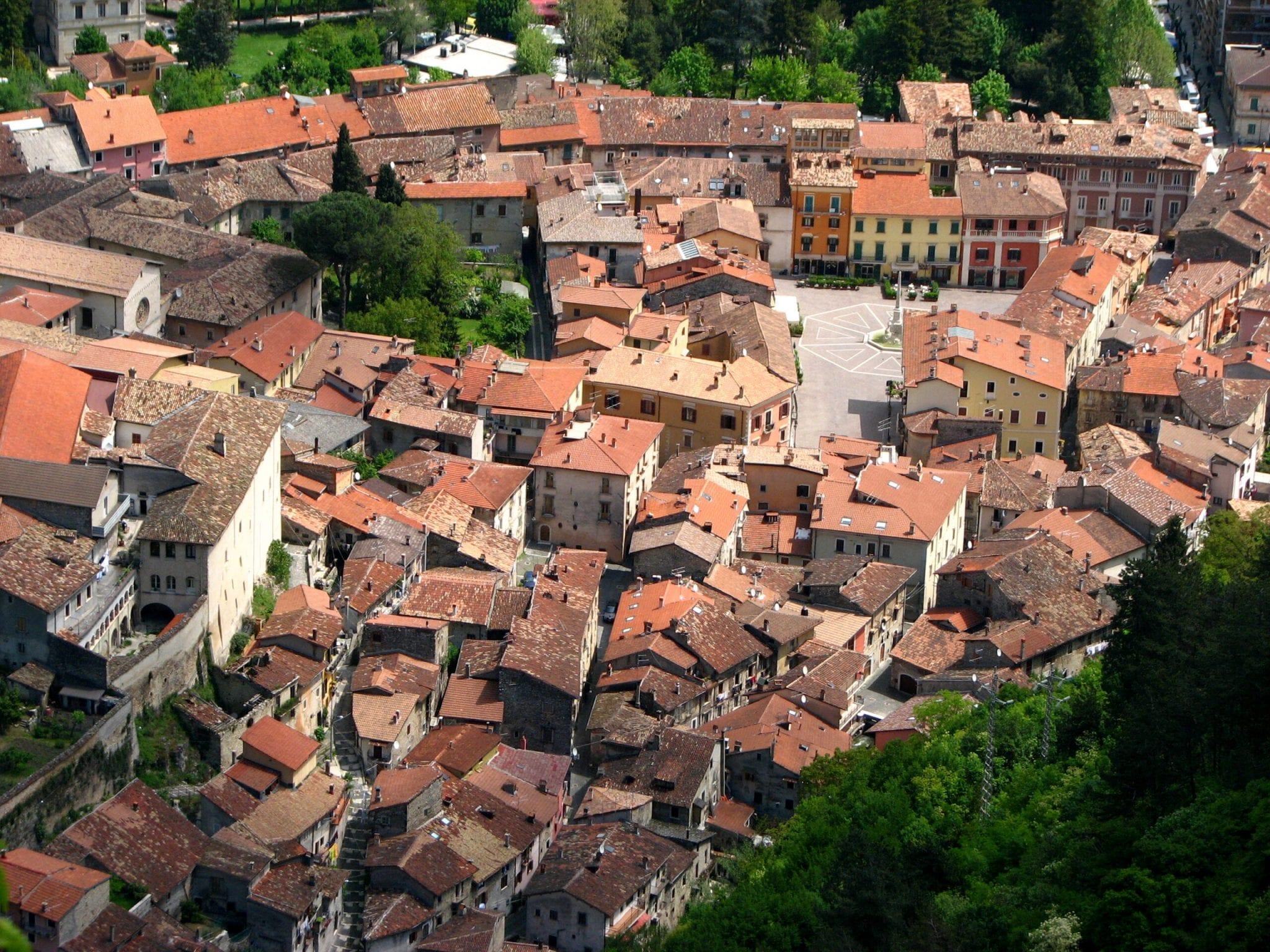 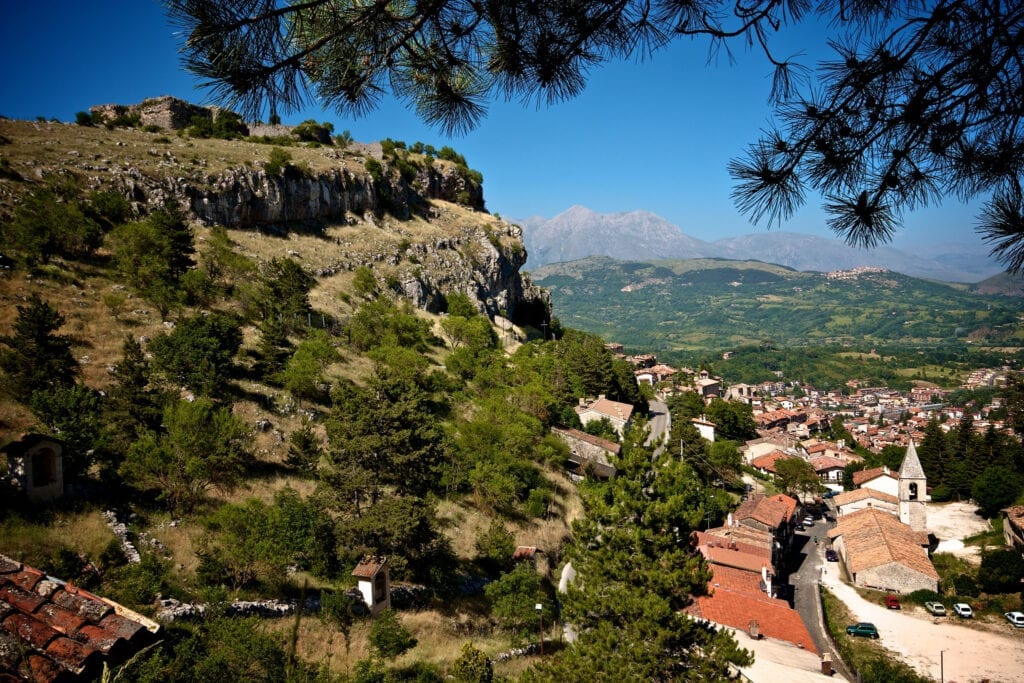 The castle has been ruined for hundreds of years, but you have come this far not for the castle, but to stand where Corradino stood that morning on the 23rd August 1268. Here the Marsica is laid out before you. Beneath you lie the roofs of the high town and the medieval square. In the near distance you see the hilltop villages of  Scanzano, Santo Stefano, San Donato, Gallo, Poggio Filippo. The majestic Monte Velino looms above it all. In the distance is the massif of Monte Sirente and the point of Celano’s La Serra. I could go on, but go and see for yourself. There is one small problem, although the Piazza dell’Obelisco looks so close from here, it’s not. So take a drink (and maybe some bread and cheese…), that cool beer in the bar is a long way back.

This post was carefully written and photographed by Pete Austin, who co runs the LifeinAbruzzo Facebook group

How to Hunt & Shave the Truffle in Abruzzo

Ortona the Bought & Fought Blue Curve on a Golden...