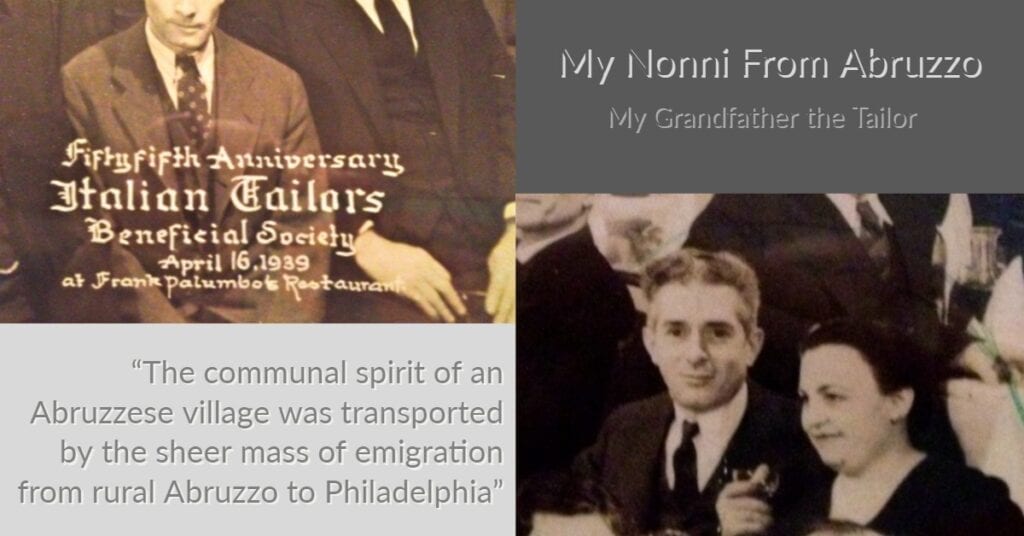 My late grandfather Giovanni (John) Pergolini, was born in 1895, in the medieval village of Montepagano, in the Teramo province of Abruzzo. His father, Antonio Pergolini, had travelled back and forth to America on three or four 2-year contracts, working as a day labourer in New York City along with thousands of other Italians. Antonio always returned home to Abruzzo.

John arrived in Philadelphia, alone at age 14, expecting to be picked by employers as a day labourer like his father. However, his fate had been sealed in Montepagano. Already apprenticed as a tailor, he was offered a job making equestrian outfits and theatre costumes at a wealthy ladies’ college on the Main Line of Philadelphia. 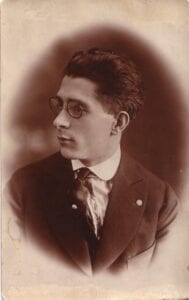 Our grandfather was from labouring and peasant farming stock, and was a kind and gentle soul who loved everyone and who smiled and laughed easily. We called him Pop-Pop, not the traditional Nonno. His kind nature endeared him to the Main Line ladies and staff in an era when Italians were looked down upon as second-class citizens.

When WWI broke out, Pop-Pop joined the Army. As a tailor, he was assigned to the Quartermaster’s Corp where he sewed uniforms for servicemen and women. After his service years he was granted American Citizenship in 1917.

His kindness extended to new arrivals aided by the Italian Tailors Beneficial Society of West Philadelphia, of which he was an active member. Many mutual aid organisations formed in those days by the Abruzzo immigrants enhanced future generations of civic life for all Philadelphians. During the late 1800s and early 1900s, the communal spirit of an Abruzzese village was transported by the sheer mass of emigration from rural Abruzzo to Philadelphia. 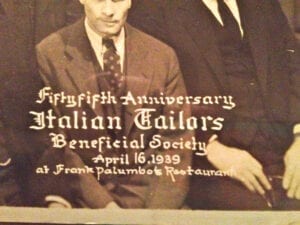 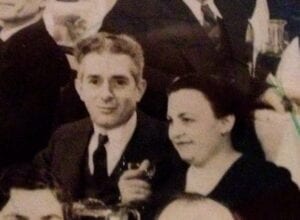 From his first experience as a ladies’ tailor, Pop-Pop developed a loyal following of women for whom he sewed for from his own home tailoring business in Darby, Pennsylvania. Pop-Pop taught my siblings and I the real secrets to good tailoring and how to properly finish our work, taking pride in each stitch. He was firm with us and instilled a sense of value for a job done properly.

Family legend goes that Pop-Pop chose not to make our mother’s wedding dress because he worried he wouldn’t do a good job. When the final fitting came, the day before the wedding, Pop-Pop was unhappy with the outcome. They accepted the dress then, at home, he took it apart and remade it.

Nothing Went to Waste

As children, we would often have a new overcoat or snow suit made of wool which Pop-Pop had left over from his home business. Nothing went to waste and every scrap of fabric found its way into some creation, for us grandkids or any other relative or friend in need. 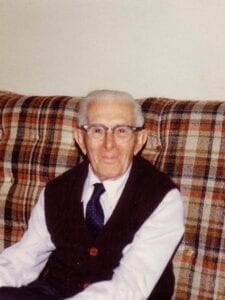 Pop-Pop always had two sewing needles hidden in his lapel. In his pockets were a thimble and a scrap of paper wound with some black and some white thread. He was always ready to help with that stray hem or loose button.

A tailor can never give up his art and craft completely. Up to the age of 90, dressed in suit and tie, Pop-Pop, could be found volunteering at his local dry cleaner’s shop in Atlantic City, New Jersey where he had retired. Sitting by the sewing machine he would replace buttons and repair buttonholes by hand. He always charmed his customers and was missed by many when he passed away peacefully at 93. 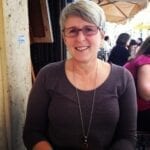 ML Tucker is a self-confessed Italophile, an American Italian who now lives in Adelaide and keeps the travel and ancestry blog Heart in Abruzzo.  Her maternal grandparents were both born in the Teramo region of the province.  She visits every few years to spend time with cousins, learn more Italian, explore her roots and search for more members of the family tree.

How to Hunt & Shave the Truffle in Abruzzo

What it Means to be a Cousin in...

Collelongo & the Werewolves that Washed in its Fountain