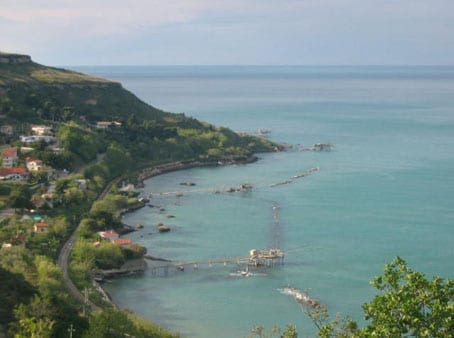 Abruzzo’s coastal resorts are worth exploring in springtime; they’re less crowded and the weather is perfect for walking.  We asked Fossacesia resident, Pia De Simone Natale to describe what to expect from the home of our favourite abbey at sunset San Giovanni in Venere. 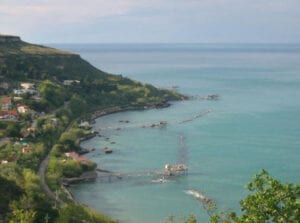 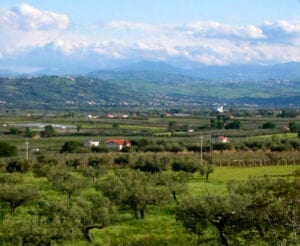 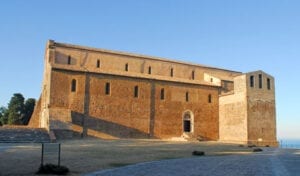 Heralded by soft, pink almond blossoms, green fields of early wheat, and the merry chirping of swallows engaged in exhilarating chases, spring in Fossacesia offers a feast for the senses, but most in particular the senses of sight, sound, taste and smell.

One thing a visitor to the small town of Fossacesia, (now officially called “city” because its population has risen to almost 7000) will notice immediately is that time, and indeed life itself, is cadenced by the ringing of bells…a deep toned stroke to signal the hour with higher pitched chimes for the quarter hour; quick clanging at 8:20 that sends children scurrying into school; mournful flats and sharps calling the townfolk to a funeral; a Marian tune to beckon in the faithful to bow their heads for the Angelus at noon. Initially it takes some getting used to, this sonorous reminder of the passage of time – especially at night – but then it becomes a reassuring feature of small town life, one that I personally would never want to give up.

And what to say of the beauty that Fossacesia overlooks: the patchworked Sangro river valley, which is visible from several vantage points, with its fertile flatlands stretching from the Adriatic to the foothills of the Majella mountains only 45 minutes away.  Just a few minutes south along the Adriatica national road lies Torino di Sangro, the resting place of the mortal remains of thousands of young men from the Commonwealth who sacrificed their lives along the easternmost point of the Gustav line in the 2nd World War and who are honoured at the Sangro River War Cemetery. The bloody battle of the Sangro left deep scars on this land, some of which are still visible in the old part of Fossacesia near the church of St. Donato. Looking west from this vantage point, you’ll be awestruck by the contrast between the majestic Mt. Majella and the lush green vegetation in the deep ravine that borders the northern part of town. To conclude this feast for the eyes, special mention goes to the colourful wild flowers that grow abundant along our roads: the violetta mammola, the sunny yellow primula selvatica, and in April, scarlet poppies.

There are several excellent eateries in town; at the risk of nepotistic bias I would definitely recommend my sister & brother-in-law’s agriturismo, the pine & cypress enclosed Casale San Giovanni, located about 200 meters from the Abbey of San Giovanni in Venere. Here, you’ll be tantalized by the fragrance and flavour of freshly baked bread, grilled lamb chops or pasta with ceci and baccalà, just a few of their many specialties. To avoid just a hint of bias, I’ll leave it to others to review the veritable banquet of traditional Abruzzese food and home-made wine that Nicoletta and Aurelio Natale have to offer. What they lack in knowledge of English is more than made up for in good natured hospitality.

After your meal, you’ll want to take a nice long walk along the Viale to work off the inevitable but delectable calories… There are a couple of hiking paths along the promontory of San Giovanni. These paths lead to the former railway station and the seaside with its 3+ kilometres of white pebble beach “decorated” with spindly trabocchi, traditional fishing rigs which have become a unique summer dining sensation: small groups are allowed on the platform for a meal prepared with the catch of the day.

Unfortunately the need for more modern rail transport has taken much of the charm out of travelling this part of the Adriatic coast, with trains now passing under the towns through a series of tunnels. The local councils along the entire Costa dei Trabocchi, from Ortona to Vasto, hope to transform it into a bike path and scenic promenade.  Now that would be great, and hopefully we’ll live to see it, if they manage to make up their minds and untangle the red tape!

There is plenty more to say about Fossacesia, Lanciano, Guardiagrele and other special spots nearby.  This part of Abruzzo is truly worth exploring, so why not consider stopping by for a day trip, a weekend, or spring break? You’ll fall in love with it, just as I did, oh so many years ago!

Getting Slippy at the Cocullo Snake Festival